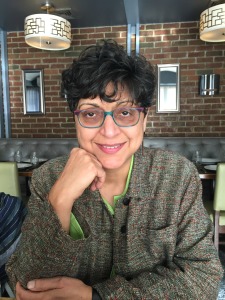 Early this morning, when it was still dark, I had a rare hour of solitude. I was driving alone in my car and the thundering drum roll that begins Born to Run played on my CD player. And a rush of thoughts followed.

I rarely feel satisfied with any of my “achievements.” But driving down empty, dark streets with Springsteen, I was taken back decades to when I was a teenager in India, filled with angst and rebellion and confusion. And yet, like a steady stream or a thin but strong thread, amid all that hot, inchoate confusion, there was this undying sense of self. The self as an artist, of someone who was not swayed by promises of money or commerce or security or conventional love, but who wanted to dwell in the sky. Someone who knew what she wanted in her life and, deep down, knew who she was even when she was totally messed up.

And this morning, these three words rang in my head. My inviolate soul.

That soul that was shaped by literature and music and that sense of self that knew that in order to find myself, I had to leave the comfort of family and even leave behind the unconditional love of my parents. (“When I left my home and my family . . . .”) That I had to reject the pleas to marry “a nice Parsi boy” and build my own happiness in a country I had never visited before. That soul that was always free even when it lived in a traditional society that was governed by the laws of What Will the Neighbors Say.

Throughout my school days, all my report cards used to state, “She daydreams too much.” Guilty as charged. I used to fantasize about leaving behind the hot, fetid streets of my hometown to live in the sky. To live on the treetops. Carrying my Walkman with me, I walked the twilight streets of Bombay listening to Dylan and Lennon and Patti Smith and civil rights songs, my head cloudy with lines from Steinbeck and Hemingway and jokes from Mad Magazine and Pink Panther and Woody Allen movies. And always, that steady beat of something, soul stuff, that made me a stranger even among the people I loved and who loved me, who shaped me, but then the shape shifted and became unrecognizable to them. It was a lonely time, but it was a glorious loneliness, charged with creativity and ambition, that red hot feeling in the belly.

I detest people who talk about being self-made. I was lifted on the shoulders of people who struggled and bent, so that I could be a little closer to the sky. My father, my guiding light, my North Star, sacrificed his own happiness to set me free. For all of that, I will always be grateful. But, this too, is true—I fought to keep that flame alive in me, to not let that pulse fall silent. I fought and I gave up a world, in order to gain a world.

This is my story, told to the beat of “Thunder Road” and “A Hard Rain’s A-Gonna Fall” and “The Boxer” and Gatsby and Tom Joad and Mrs. Dalloway and Sethe and Dali and Chagal and a hundred other influences.

Riding around on the solitary, autumnal streets of my new hometown this morning, all of this came to me in a rush. One cannot achieve adulthood without having a few regrets, and to be an immigrant is to know that sweet melancholy of the divided self, of living in multiple homes without ever fully occupying any of them. That is the price one pays for seeking new horizons, new frontiers, new freedoms. I have paid that price. And those who I chose to leave behind have also paid that bill. I wish that weren’t so, that they had not been impacted by my choices, that people were like plants that one can divide and replant simultaneously in different parts of the garden. Perhaps that is the best metaphor for immigration that I know. Not the physical act of division but the longing for it. The divided self, split in half, straddling continents, torn between past and present and the ever-present lure of a new future.

All that is true. But so is this: I have had many parents and brothers and sisters, not just the biological and fraternal ones, but also those who I read and saw and listened to. Dylan and Leonard Cohen were my kin, as were Adrienne Rich and Virginia Woolf and Annie Dillard. Jimmy Baldwin was the brother I never met. Toni Morrison the wise elder I didn’t know I needed in my life. They taught me how to live, how to value passion and truth and freedom. How to follow my own light and sing in my own register.

Above all, they taught me to fly.

Thrity Umrigar is the bestselling author of eight novels, including The Space Between Us and The Secrets Between Us, a memoir and a children’s picture book. Two other picture books, Sugar in Milk and Binny’s Diwali, will be published next year. Her novels have been translated into many languages and published in over fifteen countries. Her articles have run in the New York Times, Washington Post, Boston Globe and other publications. A former journalist, she is a recipient of the Nieman Fellowship to Harvard. Thrity is a Distinguished University Professor at Case Western Reserve University in Cleveland.