Author Interview: Helen Epstein on THE LONG HALF-LIVES OF LOVE AND TRAUMA: A MEMOIR

Born in Prague in 1947, Helen Epstein grew up in the Czech community of New York City. She attended Hunter College High School, then studied at City College of New York for two years before transferring to and graduating from Hebrew University in Jerusalem in 1970. She became an instant published journalist during the summer of 1968 while a 20-year-old college student caught in the Soviet invasion of Czechoslovakia. Her personal account of the invasion was published in the Jerusalem Post, where she received her journalistic training while an undergraduate studying musicology and literature.

In 1971, she graduated from the Columbia Graduate School of Journalism and began to freelance for diverse publications including McCall’s, Viva, Ms., Midstream, the National Jewish Monthly, the Soho Weekly News, and MORE: A Journalism Review, whose editors talked her into posing for a spoof on a typical advertisement of the time for Cosmopolitan magazine, shot by a Cosmo photographer.

Epstein went on to specialize in long-form journalism about classical musicians. Working for women’s magazines allowed her to interview pioneering women journalists. Over four decades, Epstein has continued to pursue her interest in cultural reporting. She currently reviews for the New England online arts magazine The Arts Fuse.

Q: THE LONG HALF-LIVES OF LOVE AND TRAUMA is an unflinching memoir that takes the reader into the author’s intimate life from early childhood to middle-age. You were the first journalist to write about inter-generational transmission of trauma back in 1977. Why did you decide to return to this subject?

A: I feel that book ideas choose me rather than the other way around. Most of my books, including this one, came out of my preoccupation with a subject that turned out to be relevant to many other people. Publishers were leery of Children of the Holocaust in the 1970s. Few thought that a book about the effect of the Holocaust on the offspring of survivors could be important. But in the four decades since it first appeared, not a week goes by that someone doesn’t tell me or email me how important it was to them — not only descendants of Holocaust survivors, but of American POW families, Nazi families, survivors of the Armenian, Cambodian, and Rwandan genocides, children of alcoholics, mothers who were sexually abused, and therapists. Children has been translated into six languages and has never been out of print. I think Love and Trauma may be like that.

Q: After a distinguished career as a journalist, what made you write such a candid, revealing memoir?

A: Two assertions I came across by chance piqued my interest and made me decide to write personal testimony. The first, from Virginia Woolf in 1931: “Killing the angel in the house I think I solved. She died. But telling the truth about my own experience as a body, I do not think I solved. I doubt that any woman has solved it yet…she still has many ghosts to fight, many prejudices to overcome.” I found the second on the internet, a claim that no one in all of literature has ever forgotten and, subsequently, documented a “recovered memory” of trauma. I wanted to write a first-hand response to both statements. I see myself as a witness giving testimony.

Q: Where and how did you grow up?

A: I grew up on the Upper West Side in the 1950s and 60s. It was a very interesting place and time in which to grow up. All kinds of refugees lived there: refugees from Hitler, from Stalin, from Mao and Castro; Latin American immigrants; families of blacklisted American Communists. I attended P.S. 87 and Hunter High — both excellent public schools with extraordinary teachers. I had friends of various races and backgrounds and was for a very long time unaware of class. The Holocaust and emigration had scrambled social hierarchy. My father — whose family owned a factory in Czechoslovakia — worked in a garment factory. My mother was a dressmaker whose clients included Vivian Vance of “I Love Lucy,” Edward Albee’s mother, and many wives of famous New Yorkers, including Ivana Trump. I knew people who were rich and poor, famous and obscure. 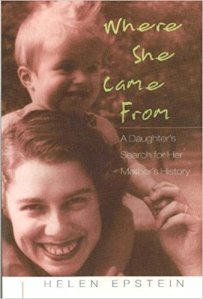 Q: What was the genesis of THE LONG HALF-LIVES OF LOVE AND TRAUMA?

A: I had moved out of the city for the first time in my life and was feeling disoriented. I heard the voice of my first love over the radio while driving down a still-unfamiliar street and decided to reconnect with him. We’d met at my piano teacher’s studio in 1963, when he was regarded as a brilliant and promising young musician. He was the son of blacklisted American Communists, while I was the daughter of anti-Communist Czech refugees. We had a complicated off and on relationship but, over 50 years, never lost touch. I asked him to help me excavate our adolescence — I initially called my memoir First Love — but, in addition to exploring our adolescence, I fell down a rabbit hole into my forgotten early childhood.

A: It was difficult. But “telling the truth about my own experience as a body” has become easier since Virginia Woolf’s time — largely due to feminism and because our American cultural context has become so much more open about sexuality. I found it harder to write about the persistent shame and uncertainty I felt about having been molested. It happened in another language — Czech. I was dogged by doubt. I had no proof. Everybody involved at the time was long dead. The molester was a family friend, a war hero, and called himself my adopted grandfather. He was also, for a long time, my mother’s lover. I wasn’t in touch with most of that when I began this memoir.

Q: Did you write composite characters or change anything?

A: I don’t write composite characters. I come out of a rigorous journalistic background: I went to Columbia J-school, was an NYU journalism professor for 12 years, and did most of my arts reporting for The New York Times. I believe that if you write nonfiction, you should stick to the facts as you know them. Otherwise, you should tell the reader what you’ve changed. In LOVE AND TRAUMA, I changed a few names and locations.

Q: Has writing the book allowed you to put the experience of being abused as a child behind you?

A: I don’t think people can put life-changing experiences “behind” them. If you are fortunate, you enjoy a stable loving relationship that allows you to look back at traumatic events and — with the help of witnesses — friends, psycho-therapists — understand what happened. I was very lucky. Very few people made it difficult for me to proceed. Most, including my former journalism students, as well as utter strangers, were helpful. I worked on this book for 15 years, and eight in psychotherapy. The major issue was getting straight and believing what I think actually happened. That was grueling. It’s a little scary to go public, but I think I’ve arrived at a place of calm.