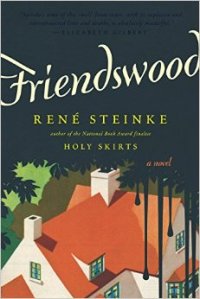 Rene Steinke, author of the 2005 National Book Award finalist Holy Skirts, has returned to the literary scene after nearly a decade with a timely and absorbing novel. Friendswood explores two issues that are seemingly discrete but are actually intertwined: corporate polluters turning a residential neighborhood into a toxic waste site and sexual abuse by high school athletes in a small town that worships football. In both cases, the immoral and possibly illegal behavior of privileged actors is indulged by the majority, who value economic growth and athletic prowess over questioning their way of life, the choices they make, and the cost of both.

The narrative is shared by four characters. Lee is a mother turned single-minded environmental activist when her teenage daughter Jess dies from a strange cancer. Jess’s death eventually drove Lee and her husband apart; now her life revolves around her part-time job in a doctor’s office and monitoring the adjacent property, the site of a former refinery. When she discovers that the site is belching toxins from the soil again, Lee moves from vigilant to vigilante.

Hal is a former mediocre high school athlete struggling to make a living in real estate; he is living vicariously through the athletic exploits of his son, Cully, and hoping that a recent religious rebirth will save him, his business, and his wilting marriage.

Willa is a 15-year-old student with an artistic streak and an eccentric persona that doesn’t fit easily into the culture of this small town located between Houston and the Gulf.

Dex is a classmate of Willa and Cully with more on his mind than just football and girls. Their lives intersect in ways they could not predict, even though readers probably can.

Time has passed since the toxic cleanup and town leaders believe part of the former refinery property is safe for new residential development. Big shot developer and former football star Avery Taft wants to bring this project to fruition, and Hal is desperate to persuade Taft to retain him for his realtor services. Lee has discovered worrisome materials during her nocturnal prowling behind the fences and attempts to alert the few influential people who are sympathetic to her unpopular obsession. Dex develops a romantic interest in Willa, as Cully begins to see her as an easily manipulated potential conquest.

The two plot strands overlap in the sense that each involves predators steadily moving toward their distracted prey, while one good-hearted person  attempts to intervene to save them. Lee tries to save another round of innocent victims from the health hazards of living near a toxic site. Dex tries to save Willa from the sexual predators and opportunists on the football team, as well as from the town’s illusions about her. In the midst of this, Willa is having terrifying visions straight out of Revelations and struggling to interpret their meaning.

As the narrative progresses, the various plots and subplots become more tightly wound, eventually resulting in a single intertwined thread. Steinke has written a book with engaging characters who are trying to achieve their goals; occasionally they come across as somewhat stereotyped but not to the extent that it undermines the story or its message. You may feel that you’ve met these people before, if not in real life, at least in other books or movies. Steinke grew up in the actual Friendswood, Texas, and she knows small towns and their residents well; she knows that football, religion, and the oil business are often the Holy Trinity in such places. (I happen to teach in just such a town in Central California.)

Friendswood tells a compelling story that maintains interest and tension throughout. It will leave you haunted by what was and what could have been.