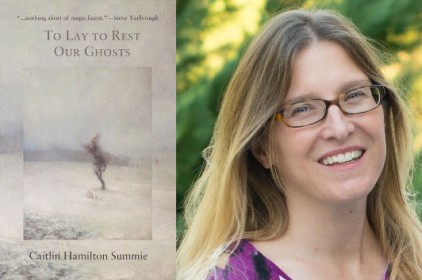 To Lay to Rest Our Ghosts: Stories

I’ve said this before, but it bears repeating. We are in the Golden Age of Short Stories. More story collections are being published now than ever, and the quality is unsurpassed. In general, major publishers don’t love story collections because they don’t sell as well as novels. They’ll use them to introduce a new writer they’ve signed, because he/she will come to them with a backlog of stories which can be released while the writer works on their debut novel (which is what the publisher really wants). It’s a good way to get new talent under contract while they develop (like signing a young baseball player and assigning him to the minor leagues for a year or two). On the occasions when a new writer comes to a publisher with a novel that is worthy of publication, the publisher will use a short story collection as a gap filler to buy time for the writer to work on their second novel.

But, in most cases today, a short story collection is likely to be published by a small, independent publisher or university press. As a result, they fly below the radar and rely on reviews and word of mouth to reach potential readers. That is where blogs and social media can play a key role in helping writers and readers connect.

The latest example of a stellar short story collection from a small press is Caitlin Hamilton Summie’s To Lay to Rest Our Ghosts, a ten-story, 200-page book that deserves your attention. As the title suggests, Summie’s characters are at crossroads of various kinds; they are struggling for emotional independence, attempting to resolve long-standing conflicts (usually familial), and trying to make sense of a complex and confusing world. These are quiet, intimate stories driven by character more than plot, yet they are compelling in both their dramatic tension and often unsettling (but not unsettled) resolution.

Set mostly in rural and urban Minnesota, with detours to and New York City, these stories are probing examinations of the seemingly small, mundane moments that reverberate through our lives. Life-changing decisions or events do not always arrive in the form of violent confrontations or shocking accidents. Sometimes it’s as simple as looking at old family photo albums (as in “Patchwork”) or failing to show up at your grandfather’s deathbed because you just can’t bear it (as in “Geographies of the Heart”).

The opening story, “Tags,” takes place in WWII-era Kansas City, where young Dolores bides her time playing marbles with her friend Jimmy and fighting with her teenage brother Larry while she waits for her father to return home from the war. Jimmy learns that his father has been killed in the war but at least he has his father’s dog tags. The situation will be more complicated for Dolores. Summie sensitively depicts what it was like growing up during the war, when the world was nearly incomprehensible to a young girl.

“Growing Up Cold” finds John returning home to Minnesota from Japan following the death of his sister, Lonnie. The renewal of a long-simmering conflict between John and his older brother James adds to the tension in a family that is now down to three men, his mother having died several years earlier. John has lost his mother, his sister, and, in a sense, his brother. But he has his own way of grieving, which his father and brother find mystifying. The story’s potent ending creates a sort of peace, or at least a truce.

“Brothers” treads similarly fraught sibling territory. A car accident has left 28-year-old George in a wheelchair. He has abandoned graduate school and his girlfriend in Minneapolis and moved to the family cabin in the woods of Wisconsin, thinking a quiet life of furniture making will suit him best now. But his younger brother Ephraim wants him to return to the Twin Cities, to be near him and his parents and close to top-notch medical care. Ephraim’s visit to the cabin brings matters to a head.

“Patchwork,” “Geographies of the Heart,” and “Taking Root” feature the same characters. In “Patchwork,” recently unemployed Sarah MacMillan decides to write the family history, but she encounters resistance from her grandmother, Catherine, who insists that her sister Cecily be left out of the story. That only spurs Sarah on to investigate what Cecily had done to be the subject of such longstanding scorn. Her determination to write about Cecily, while maintaining her relationship with Catherine — and what she learns about not just Cecily, but the whole family — forges a hard-earned respect between the two women.

In “Geographies of the Heart,” Sarah’s grandfather is dying; she is his constant companion, while her sister Glennie, an OB-GYN, is physically and emotionally absent, to Sarah’s constant frustration and disappointment. Eventually, the sisters struggle to reach each other across the resulting chasm.

In “Taking Root,” which concludes the MacMillan trilogy and closes the collection, we catch up with Sarah, who is now married to Al, a religion professor, and the mother of Amelia. They’ve recently suffered a miscarriage, which has left them grieving in different ways. Sarah and Amelia decide to take a road trip, and Al is soon caught up in the labor and delivery of his neighbors, Howard and Norda, which stirs up the recently settled sediment of his emotions. The cavalry arrives in the form of Glennie, now one of the best OB-GYNs in Minneapolis. And Al manages to keep his head above water, where he can see the sunlight.

To Lay to Rest Our Ghosts can sound depressing in the description, but Summie’s empathy for her characters’ humanity is so strong, and her prose so lovely, that a palpable warmth emanates from the stories despite their physically frigid settings. I look forward to the publication of her first novel; the trilogy in this collection suggests that she will be equally accomplished with the longer form.