‘ROUND MIDNIGHT: a tapestry of four diverse lives set against 50 years of a changing Las Vegas 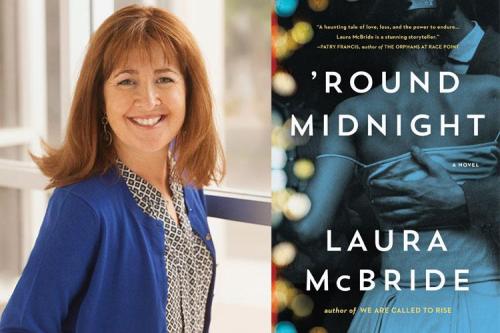 In just two novels, Laura McBride has become the unofficial Laureate of Las Vegas, depicting life on and beyond the Strip in vivid, occasionally wrenching detail. Her debut, We Are Called to Rise, made a strong impression with its interwoven narratives of disparate lives coming together in unexpected ways, with profoundly moving results. Her follow-up, ‘Round Midnight, uses a similar structure to probe the the lives of her four characters and the dramatic changes in her hometown since the 1950s.

The novel is told in three parts. The first part introduces the most complex of the characters, June Stein, a 21-year-old unhappily married proto-feminist who flees a life of looming suburban drudgery in 1950s New Jersey to create a life of her own choosing in Las Vegas.

“When she moved to Las Vegas, she was free of her marriage, free of certain expectations (not just those of others, but also her own)—free of a past she had never fully shouldered. And it was Vegas in the fifties, when it was a small town and a big town, when no one she had ever known would be likely to visit, when a young woman who enjoyed men and adventure and the casual breakdown of conventions was something of a community treasure.”

Before long, she is married to Odell (Del) Dibb, with whom she renovates a casino, the El Capitan. With the hiring of a charismatic black singer named Eddie Knox to perform in the Midnight Room, the El Capitan becomes one of the city’s hot spots. McBride perfectly captures the rapidly changing physical and cultural scene in Las Vegas, which is reflected as well in the liberal attitudes of June and Del and their close working relationship with Knox at a time when the city was still segregated. The plot soon becomes somewhat melodramatic, but it sets up one of the other sections of the narrative, which comes into play in the last half of the book.

Part Two of ’Round Midnight, set in 1992-93, tells the story of Honorata, a young woman from the Philippines who is essentially sold by her uncle to a wealthy but socially awkward man from Chicago when Honorata shames her family. He is frequently away on business, stranding Honorata in a world she barely comprehends and intensely despises. Eventually, he takes Honorata, whom he has renamed Rita, with him on a trip to Las Vegas, where she discovers that he is a high-stakes gambler who is well-known to the owners of the El Capitan casino.

As sometimes happens, a few days in Las Vegas changes her life.

Part Two is also the story of a young music teacher named Coral Jackson whose father, Ray, was Del Dibb’s best friend and right-hand man for many years until he died shortly before Coral was born. She had always known that Ray was not her father, for this reason and because she was obviously mixed race, but her mother refused to tell her the identity of her birth father. It didn’t seem important to her mother or her three siblings; as they always said, she was a Jackson through and through. But she always wondered. Through clever but generally plausible plot twists – connected to the El Capitan — Coral and Honorata meet and develop a tentative friendship.

The third part, set in 2010, introduces Engracia, a Mexican immigrant who worked as a maid at the El Capitan until her heartbreaking past caught up with her and set her on a life-altering path. The trajectories of Honorata, Coral, and Engracia intersect, eventually setting up the return to the narrative of an 80-year-old June Stein.

As in We Are Called to Rise, McBride juggles the various narrative strands skillfully, maintaining interest in the current character while holding the other characters in the near distance. At the same time, she seamlessly incorporates the sociocultural issues of each era into the respective characters’ lives: race relations in the 1950s, cultural and geographic displacement in the midst of Vegas’s boomtown years of the 90s, immigration in the last decade, and related racial and ethnic issues that arise out of the characters’ diversity of backgrounds. The real power of ’Round Midnight comes from McBride’s sensitive depiction of a range of internal and external conflicts and in the way these women change each other’s lives. All the while, Las Vegas, like the four protagonists, is steadily transformed.

’Round Midnight combines the best of plot-driven summer fiction with the kind of character studies and social, cultural, and economic context one finds in literary fiction. McBride has suffused this novel with a level of compassion and intelligence that makes the whole greater than the sum of its many parts.