Right, Like a Man: Chris Jane on the power of gender in an author’s name 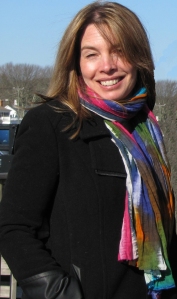 I prefer the way I write when, while writing, I imagine being read as a man.

There’s an immediate freedom to not be apologetic. To do as we were taught in high school English and eliminate the self-conscious “I think…” from the writing.

I’m not sure when it happened, the shift into having to pretend.

My father, a single parent, never gave my sister or me the impression that being female was considered a weakness or would limit us in any way. Now and then we’d have to fetch him things, and we were tasked with decorating and undecorating the Christmas tree, but that was because we were his kids. It had nothing to do with being girls. That I was a “girl” was so separate from my identity that I would sometimes be confused about why I didn’t feel more like one. Females my dad’s age who had soft, styled hair and wore perfume and nail polish were curiosities. I wanted to ask them questions about womanhood. I wanted them to somehow infuse me with the kind of femininity I saw blooming in the girls my age who wore clanking bracelets and pink lipstick.

That absence of innate femininity combined with being raised by a man contributed to my being comfortable with – and preferring to be one of – the boys. I didn’t fear them and hadn’t been raised to defer to them. We were friends, and we were equals. It never occurred to me that their thoughts, perspectives, experiences, or opinions were (or should be) more valid than mine. I was pretty sure I was even as strong as they were.

It took a woman telling me I was not, in fact, as strong as a man to introduce me to what is often a completely arbitrary system of inequity: At around 20 years old, I applied to be a stock person at a liquor store in upstate New York. I knew I could lift the boxes because I’d done it for about a year at a previous job. The store owner, a woman in her late 60s, immediately said no upon taking my application. I asked why. “You’re a girl,” she said. I told her I could lift the boxes. I asked her to allow me to demonstrate. “I’m not going to hire a girl,” she said. “I need a boy.”

Even if I had proved I was capable, she still wouldn’t have hired me. I was a girl, and that was that. Worse was that she wouldn’t even let me try. Automatic disqualification.

It took a little over ten years for gender as a hindrance to come up again (and ten years, when you think about it, is pretty good). I was looking for an agent for Pretty Much True, a book that would seem to have had everything going for it: It was a war novel about the first year in Iraq (2003) that was being shopped around while service members were still in Iraq and that had been written by someone who had first-hand experience with war.

Turns out it wasn’t the right kind of experience.

One agent wanted more action in the first few pages of his war novels.

Said another male agent, “The market for war stories is pretty saturated.” (If you and I were having a conversation, this is where I would pause to allow time for counting through all the new male-dominated, male-written war novels and movies that have been released in the last seven years.)

What he meant was that there was no market for a literary war story written by a woman about a woman if the female character’s war experience didn’t include guts (by this I mean bloody innards), guns, grenades, and guys’ guys.

After the book’s eventual release, I discovered that although a few men had been very receptive and had even endorsed it (one of them decided he liked it enough to publish it), I was having a hard time getting “regular” men to read it. It’s never been a goal to write specifically to women; male readers were/are just as desirable. But how do you get men to read about a woman who isn’t shooting a bunch of terrorists? (And would men who don’t typically read “women’s books” read that story, even?)

“Where’s the drama or action in waiting?” said one male reader who took some persuading to get to read Pretty Much True.

Some of the most suspenseful and intriguing stories involve waiting…waiting for a court decision, waiting to be found by a killer, waiting for an acceptance or rejection letter, waiting for the return of a loved one, and all other manner of waiting. And of course it’s never just waiting; it’s waiting “plus”—plus a story, plus characters, plus conflicts, etc.

But put a woman waiting up against the word “war” in a book by a female author, and the waiting – unless it’s a soldier waiting for the action to begin – is thrust into a male arena where it immediately suffers by comparison and becomes the object of perplexity. “Waiting? What? What are you—really?”

“Your novel will obviously appeal to other military spouses,” said a man, who hadn’t read Pretty Much True, while interviewing me about it for a literary blog. “Have you been focusing your marketing efforts on readers in the military community?”

I wonder whether, following the release of We Were Soldiers Once…and Young, The Things They Carried, The Sorrow of War: A Novel of North Vietnam, or American Sniper, the natural target markets were veterans and active service members.

(I don’t really wonder. It’s assumed that the general public will be interested in the masculine war experience.)

A military consultant working in Hollywood, when approached about the potential film viability of Pretty Much True, said – also without having read the book – that it would be a great story for a specific female-focused cable channel, but that America might not be ready for another “dark” at-home war story. After all, Brothers had just been released.

Yep. One movie that explored nothing at all having to do with waiting, but that did have a woman in a primary role, had just come out. Add 1984’s WWII movie Swing Shift, and there we were flooding the market again.

Amusingly, the same man had mentioned, just moments before, that he thought the public was ready for another war movie.

Because males were clearly having better luck selling their war stories, it was hard not to imagine a parallel universe in which Pretty Much True had been published under a male name. Men writing a lot like women, even about women, generally achieve higher literary acclaim and garner more universal interest than do women when the story has nothing to do with war (Irving, Eugenides, Franzen), so wouldn’t the same be true if it were a story about a female during wartime?

No idea. But the temptation to approach future writing and publishing projects as a maybe-male, if even just to experiment with reactions, grew.

I officially decided on the name change at a party in Florida over the summer. When I told a man that I was thinking of using a gender-ambiguous pen name, he said, “I apologize on behalf of my sex.”

It hadn’t even been necessary to tell him why I was doing it.

Said another man, upon seeing the cover for my latest novel and noticing the name change, “I wish it weren’t necessary, but I can see why you’d do it.”

“But people do take women (and women writers) seriously,” it will be, and has been, argued.

It might be easier to agree were people not still saying, “My favorite authors are X and Y. My favorite female authors, though, are ….”

It might be easier to agree had novelist Nick Hornby, who wrote the screenplay for Wild, not recently thought it necessary to describe Wild as “not like any chick flick” he’d ever seen.

Oh. Right. It stars a female.

Obviously that would be the natural conclusion.

My father raised me to be confidently outspoken, and to be myself. Until recently, I’d considered it the highest mark of honor to put my name on my writing—middle initial included. Anonymity was not for me. Pen names, I’d reasoned, were for the timid or the reclusive.

Now I just want to be reasonably sure I’m getting a fair shot at being read by a mixed audience and at being taken seriously as a writer. Life is short, and I don’t want to waste time fighting, no matter how legitimate the fight.

And as legitimate fights go, that this needs to be a fight at all is bleeping ridiculous.

Chris Jane, author of Pretty Much True and The Year of Dan Palace, is a former adjunct English professor, former feature writer for a daily newspaper, former instructor of expressive writing, play writing, and screenwriting, and a former editor at American Fiction (New Rivers Press). Jane’s series of interviews with writers and others in the publishing industry, 5 On, can be found on Jane Friedman’s writers’ resource website. For updates about this (or, if you just wanna), please follow Chris on Twitter at @chrismjane or visit http://chrisjane.net.