A huge thank you to Read Her Like an Open Book for giving me a chance to talk with two writers I deeply admire and think of as my literary big sisters, Alison Umminger and Christine Sneed. — Chrissy Kolaya

Chrissy Kolaya is a poet and fiction writer. Her work has been included in the anthologies New Sudden Fiction (Norton),  Fiction on a Stick (Milkweed Editions), and Stone, River, Sky: An Anthology of Georgia Poems, as well as in a number of literary journals. She teaches writing at the University of Minnesota Morris, where she’s one of the co-founders of the Prairie Gate Literary Festival. Her first novel, Charmed Particles, was published by Dzanc Books in November 2015. [Read my review here.]

Alison Umminger is a professor of English at the University of West Georgia.  Her short fiction has won the Lawrence Foundation award from Prairie Schooner, and been published in numerous journals.  American Girls is her first novel. 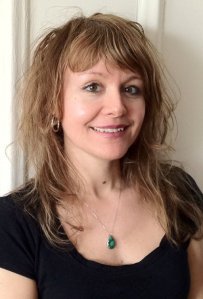 Christine Sneed‘s stories have appeared in The Best American Short Stories, O. Henry Prize Stories, Ploughshares, Glimmer Train, Massachusetts Review, The Southern Review, New England Review, Greensboro Review, Pleiades, and a number of other publications.  She is the author of the novels Paris, He Said and Little Known Facts, and the story collections Portraits of a Few of the People I’ve Made Cry and The Virginity of Famous Men. She lives in Evanston, Illinois and teaches for the graduate creative writing programs at Northwestern University and Regis University in Denver.

CK: Would you each tell us about your new book? 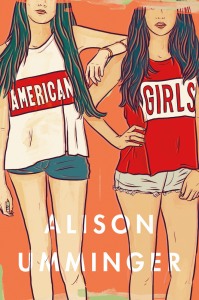 Alison: American Girls is about a 15-year-old who steals her mom’s credit card and runs away to L.A., where she researches the Manson girls, hangs out on a television set with her sister’s boyfriend, and becomes a little less shitty than she was at the start of the novel. It’s low on plot and heavy on voice/atmosphere, and I originally conceived it as a kind of love letter to Los Angeles. 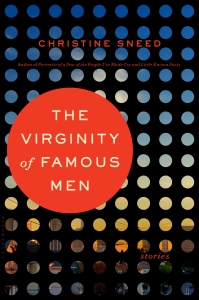 Christine: The Virginity of Famous Men, my forthcoming short story collection, will be out in mid-September. In “Beach Vacation,” a mother realizes that her popular and coddled teenaged son has become someone she has difficulty relating to, let alone loving with the same maternal fervor that once was second nature to her.

In “The Prettiest Girls,” a location scout for a Hollywood film studio falls in love with a young Mexican woman who is more in love with the idea of stardom than with this older American man who takes her with him back to California. “Clear Conscience” focuses on the themes of family loyalty, divorce, motherhood, and whether “doing the right thing” is, in fact, always the right thing to do. The title story, “The Virginity of Famous Men,” explores family and fortune and picks up a year and a half after Little Known Facts, my second book, left off.

CK: California looms large in both of these books! I’m curious about the idea of revisiting your own literary territory as Christine does in her title story. Christine, would you talk a bit about the experience of returning to these characters? What are some of the challenges and rewards?

Christine: It was a lot of fun to imagine my characters from Little Known Facts a year and a half after where that book ends. A few people had asked if I was going to write a sequel to this novel, and I don’t have plans to – other than this short story. I guess the challenge of writing about them now is whether or not I remain faithful to the tone of that novel and portray them in a believable way. I hope I succeeded. The reward was that I again had a good time writing about fame and its effects on the relatives of the famous.

Christine: I love that on Twitter there are hashtags devoted to reading picks, e.g. #fridayreads and #amreading, which I think can generate a lot of buzz for many authors.

In Chicago, where I live, there are more than 50 “live lit” series, one of which I used to help direct and curate, Sunday Salon Chicago. Due to the number of reading series in any given week here, so many writers are able to read new work, sell books, meet other writers, and in some cases, create lasting friendships and working relationships.

There’s a lot of support for writers in this city, in general, and also, quite a few independent bookstores with staff devoted to promoting the books of local authors. Much hand-selling goes on, and I think more and more writers and publishers see this as a key factor in a book’s success.

Alison: I think some of the online communities (the functional ones) are pretty amazing for sharing information and encouraging folks along the way. The NaNoWriMo is pretty awesome for getting folks motivated in the midst of their busy lives — and I love hearing about some of the mini-retreats that groups of writers arrange for working collectively, with a team atmosphere. Writing can be so lonely and isolating, and yet I think a certain amount of feedback along the way is essential.

CK: What are you most proud of doing to build and maintain literary community?

Christine: As mentioned above, I helped to organize Sunday Salon Chicago for two years, which was a labor of love for everyone involved. Like many recurring reading series, my co-organizers and I couldn’t pay our readers; we didn’t charge admission for the readings, in order to reach the widest audience possible, and we weren’t paid for our work either.

On my website, I also do Q and As with writer friends who are promoting new books. It’s a lot of fun, and it helps get the word out to a few more people who are likely to pick up these titles and share them with friends, too.

Alison: Well, I feel like I am part of a “little writing group that could” that includes Maggie Mitchell and one other member — three of us worked on novels together, and two have made their way into the world since our group’s inception. I also joined a group called the Sweet Sixteens this year, made up of hundreds of folks with debut YA and MG novels. I’m mid-way through reading sixteen debut novels, and that’s been a wonderful way for me to get to know other YA writers.

CK: Alison, did you always imagine yourself writing for a young adult audience or has your audience changed throughout your writing career?

My agent had been telling me for years to try YA, but I have a lot of trouble thinking of books in terms of genre. I happen to love writing books about younger characters, because adolescence is so intense and so many things happen for the first time. I feel like Anna’s story happily fits what YA is right now, and I’m thrilled to be part of the lively and diverse YA community.

CK: In the razzle-dazzle of book promotion, it can seem to readers and emerging writers as if you must be one of the lucky few who’ve won the talent-and-good-fortune lottery. What were some moments of struggle for you along the way, and what advice can you share with writers who find themselves reading this while in the midst of one of those challenging moments?

Alison: Well, the distance from my “I want to be a writer” moment to a hardback with my name on the spine was 23 years, so I’d say I’m a walking advertisement for persistence. I wrote a literary novel before this one that was rejected by at least 40 publishers, many of whom genuinely liked it but saw no larger market for the book. That still kind of breaks my heart, but the marketing aspect of books is very real, and I think writers need to be realistic about what that means. I’ve had students who are very talented, but very niche writers, and I encourage them to look for smaller presses and not be discouraged if agents aren’t lining up at their doors.

Christine: I think you have to learn to manage your expectations when it comes to a book’s sales and reviews – i.e., how many copies will sell and how positive the reviews will be (provided you get reviews, which certainly isn’t a given, especially with mass market periodicals).

You can never predict what will happen, as obvious as that sounds. I wish it were easier to earn a steady living from writing, but it’s extremely difficult, and I keep reminding myself of something my friend and fellow writer Karen Brown said recently: “The next book!” as in, the next book will be the one that breaks through in a way that will allow you to stop having to scramble so much for teaching work and other paying gigs and permit you to focus more on your writing.

CK: What advice would you give your younger writing self?

Alison: Your real life is pretty separate from and far more important than your work, so don’t put so much value on being a published writer. And enjoy the process of writing the book — that’s the real fun part.

Christine: As I said earlier, learn to manage your expectations. No book’s trajectory can be predicted. The writing has to be the focus, always.

CK: What’s next for each of you?

Christine: I’m working on a new novel and a little bit of nonfiction and short fiction. In the fall, I’ll be doing some readings in Illinois, Michigan, Indiana and Wisconsin to promote The Virginity of Famous Men.

Alison: I’m working on another YA novel, also a realistic contemporary piece. It’s very early in the drafting process, so I’m trying to stick with it even though the book isn’t exactly talking to me right now. Pants to the chair method, as my dissertation director so wisely once told me.

CK: I love to root for the underdog. What’s a book or author that you’d like to see more folks fall in love with?

Christine: Zoe Zolbrod’s memoir The Telling is an excellent book that I recently read that was published in May by an independent Chicago press, Curbside Splendor. I loved Alison’s book too – American Girls (UK: My Favorite Manson Girl). I hope it finds readers far and wide. And your novel, Chrissy, Charmed Particles.

Alison: In terms of YA, I just loved Devil and the Bluebird by Jennifer Mason-Black, and I’m super excited for the brilliant Dana Johnson’s story collection, In the Not Quite Dark, which is out this month. She’s one of the best short story writers out there, and I hope this finds its way onto lots of reading lists this summer.

CK: Thanks so much, Alison and Christine! Thanks Bill, for hosting our Q&A and for all the work you’re doing to bring together readers and literary fiction by women!