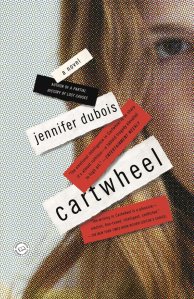 Wealthy American college girl goes to Italy as a Study Abroad student, ends up in a romantic triangle with her roommate and an Italian student, and the roommate is found murdered. College girl and Italian boyfriend are tried and convicted. Sounds like the plot of a thriller but, of course, truth is indeed stranger than fiction, and it’s the Amanda Knox “story.”

In Cartwheel, Jennifer duBois, author of A Partial History of Lost Causes, tracks the Knox case closely as she explores the characters of Lily Hayes, her roommate Katy Kellers, and the object of their affection, Sebastian LeCompte, the wealthy young man who lives next door to their host family. Moving the story from Italy to Buenos Aires, Argentina, duBois perfectly captures the surreal nature of being caught up in another country’s legal system, particularly when one has been charged with a shocking murder. Lily is an intriguing, if not particularly likable, young woman and protagonist. Despite her generally good intentions, Lily experiences personal difficulties with her host parents, the Carrizos, who are unusually private; with Katy, of whom she is suspicious because of her all-American good looks and positive attitude; with her employer at Fuego restaurant and bar; and with her divorced parents, pretentious intellectuals whom she addresses as Andrew and Maureen.

The problem is that Lily is brilliant (2280 on the SAT) but self-absorbed and naïve. She is the classic “fish out of water” in a foreign country. She speaks Spanish but still has trouble communicating effectively with many people. She and Katy present what appear to be opposite personas: everything is a struggle for Lily, while everything seems to go smoothly for Katy, and Lily cannot figure out why. Most of her conversations with the other characters are cases of two people talking past each other. Lily doesn’t understand what motivates others and she doesn’t communicate her own needs and attitudes effectively. She is the type of person about whom it has become common to say, “It seems like she has Asperger’s Syndrome. She’s a high-functioning autistic.”

duBois wisely starts in media res, throwing us directly into the action, as Lily’s parents arrive in Buenos Aires following her arrest. The novel then moves back and forth through time to let us see Lily adapting to life in Argentina, developing a relationship with the reclusive eccentric, Sebastien, and struggling to fit in and thrive during her year studying abroad. She has a very casual attitude about her college classes, concentrating instead on learning to live like a local and enjoying herself. We watch as Lily’s circumstances slowly devolve, knowing what is coming but not quite understanding how it could have happened. As with any “tragedy,” the reader notes the many ways in which it could have been prevented had one thing been different: an action not taken, words not said. And yet, like a Greek tragedy, the outcome seems inevitable, even pre-ordained.

Cartwheel is enriched by duBois’ analysis of the motivations of the Argentine prosecutor, Eduardo Campos, and his own personal difficulties; the hunger of the media in Argentina, the U.S., and around the world for the sordid details of the alleged love triangle and murder; and the workings of the justice system.

In the midst of this compelling nightmare of a story duBois has inserted some subtle commentary on the uninformed, inane, and occasionally unethical actions of the media and legal system that will seem very familiar to American readers, who have recently experienced the media circus surrounding the trials of Casey Anthony, Jodi Arias, and George Zimmerman.  Cartwheel works well as both a suspenseful character study and a timely analysis of the law and media in a world with a 24/7 news cycle that must be fed constantly.

While the many ethical dilemmas and the complex plot make Cartwheel an intense, immersive reading experience, it is not without its drawbacks. The characters are not especially likable. Lily remains somewhat sympathetic despite being her own worst enemy; in the high school where I teach she would be viewed as a smart and eccentric but clueless “drama queen.” Katy Kellers is pleasant but remains something of a cipher throughout the novel, both to Lily and to readers; her main role is simply to be the murder victim.

But it is Sebastien LeCompte, the wealthy young neighbor, who is a completely mystifying character. He is a dandified young man who speaks in a ridiculously arch manner right out of The Portrait of Dorian Gray.  Why he appeals to Lily, and possibly to Katy, is a mystery. Perhaps it is because he has spent time attending American schools and speaks English or that his parents have recently died in a small plane crash. He is annoying and even infuriating and has the effect of making aspects of the story seem implausible.

duBois’ writing style presents another stumbling block to the complete success of the novel. It is clear that she is a prodigiously talented young writer. Her first novel was honored by the National Book Foundation’s 5 Under 35 program and was a finalist for the PEN/Hemingway Award for Debut Fiction. duBois’ writing is a bit like that of a genius who finds it difficult not to display her virtuosic technique and fierce intelligence, even if it does not necessarily serve her purposes. At times, the prose in Cartwheel is wordy and unnecessarily showy. Her fondness for parenthetical comments leads to needlessly dense syntax that interferes with the spell she is otherwise successfully casting early in the novel.

When Cartwheel is good, it is very good. But when it loses its footing, it is awkward and frustrating. There is a great novel, one that truly captures our times, within the pages of this book. Perhaps it will appear in the published version due in late September. Either way, Jennifer duBois is a young writer to be reckoned with, and I look forward to her next book. 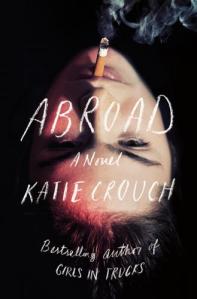 It has long been a tradition for wealthy or academically outstanding students from the U.S. and the U.K. to study abroad for a year while in college. For British students from the mid-1600s through the mid-1800s, the “Grand Tour” of France and Italy was an intellectual coming of age, providing firsthand exposure to the “legacy of classical antiquity and the Renaissance.” Both countries offer excellent universities, world-class cities, unparalleled history, and boundless cultural opportunities.

Into this tradition steps contemporary Irish college student Tabitha (Taz) Deacon, who transfers from England’s Nottingham University to a university in the old city of Grifonia, Italy (think Perugia in the Umbria region). Taz has chosen Grifonia instead of one of the larger cities because of its rich Etruscan history, with which she is fascinated. Soon after settling into a cozy rental just off the city center hosted by two local girls, Taz meets her roommate from America. Claire is a free spirit, eccentric and unpredictable, perhaps even unstable, but with a striking beauty and undeniable charisma that win over most people.

Taz is something of an introvert, but she longs to be part of something larger than herself, in both her academic and social lives. She wanders around town observing both the Grifonians and her fellow “study abroad” students and is intrigued by a trio of sophisticated rich girls from the U.K., one of whom, Jenny Cole, is a fellow student at Nottingham University.

Abroad follows Taz’s experiences as she is admitted into this seductive triumvirate, develops a fragile relationship with Claire, attempts to pass her classes, and seeks out romantic experiences with Italian boys, who are mystifying yet irresistible. She is determined to crawl out of her Irish schoolgirl shell and live passionately while in Grifonia, and Jenny Cole offers her a chance to do just that.

The four girls, calling themselves the “B4,” command a great deal of attention and admiration; they sidestep long lines to get into the most popular bars and restaurants and are given good tables once inside. Everyone seems to know them. They are supremely confident, wear designer clothes, and drink as if they have hollow legs. They are everything Taz wants to be, at least while she is independent in Italy. She seeks transformation, and, in a sense, achieves it.

Taz later explains how central the desire to experiment and change was in the actions of many. “But soon blood would flow, and the others would, knowingly or not, change the truth. Their lies were out of fear, I suppose. Though it could have been something else. Didn’t I, who had in the past weeks transformed myself from the mouse I’d been, know the power of changing reality?”

Not surprisingly, Taz gets both more and less than she bargained for when she befriends Jenny, Anna, and Luka. And that is the core of Abroad’s steadily intensifying story. It’s based loosely on the Amanda Knox case of 2007, in which Knox and her Italian boyfriend were convicted of murdering her British roommate, Meredith Kercher, in what was presented by the press and prosecutors as a lurid love triangle gone wrong. Another Italian man with a long criminal record was convicted of the same crime in another trial

Abroad finds Katie Crouch navigating much darker emotional and psychological territory than in her previous books (Girls in Trucks, Men and Dogs). Rather than write about the controversial investigation and prosecution of Knox, using multiple flashbacks (as novelist Jennifer du Bois did in 2013’s Cartwheel), Crouch presents a plausible version of events and motivations for the eventual murder. We get to know Taz intimately, while Claire remains a complex presence viewed through the eyes of Taz, but not a main character. In the Knox-Kercher case, the media’s reporting was so sensationalized that a fair trial was impossible. As Knox and her supporters have long maintained, she was and still is largely misunderstood and mischaracterized by the public.

On this point, Taz explains, “You see, that was the thing about Claire. I knew her. She and I wanted the same thing. Later, she was painted a hundred different ways: insane, sexy, volatile, brilliant, stupid, insatiable. But the Claire I knew was just a girl with the same simple desire I had – to be loved by as many people as possible.”

“The next day – and years – was filled with clues that made themselves known, rearranged themselves, and faded in time with whomever was being accused at the moment. Almost as if we had all been playing a game in order to lead the police and the world down an endless array of paths. The answers were, in fact, there in the initial police report. Though the story was infinitely complicated. The police wanted a snapshot, whereas the truth, as it often is, was more of a shadowy, ever-changing tableau.”

Crouch has done an admirable job of depicting the complicated and unpredictable thoughts, emotions, and actions of a young woman, exacerbated by loneliness, cultural confusion, and a range of conflicting desires. She captures well the timeless essence of growing up far from home and having to rely on instincts and judgment that can easily lead one astray.

While Abroad has been promoted as similar to Donna Tartt’s spellbinding 1992 classic The Secret History, it doesn’t quite reach that level of intellectual and emotional power. Admittedly, it is only half the length of Tartt’s book, so who knows what Crouch could have accomplished if she’d decided that was her intent. But Abroad stands on its own merits as a fast and often fascinating exploration of the ways deeply flawed but very human people can make a mess of their lives.