Diana Wagman: Saved by a curandero to write again (or, maybe clowns are kind of creepy) 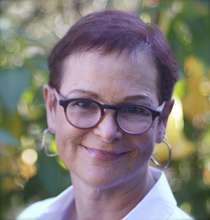 The Mexican faith healer, or curandero, had his shop in a rundown Los Angeles strip mall between a nail salon and a Baskin-Robbins.  The hand-lettered sign in the window read “Limpia.”

I don’t speak Spanish and I’m usually a skeptic, but I was desperate.  I definitely needed cleansing.  Or something.  Incense wafted through the open door.  Inside the store was crowded with statues of the Virgin of Guadalupe, Jesus, the devil, and Day of the Dead skeletons.  There were crystals and rosaries and candles and crucifixes and a tapestry of the Last Supper, plus a few taxidermy animals.  A bobcat.  A dusty owl.  The black crow with the yellow eyes on the counter was the most disturbing.  It must have been freshly stuffed because it still smelled dead.

What was I doing there?  I had three published novels.  My first sold without an agent; my second won an award.  My third book got good reviews—if lousy sales.  So what was wrong with me?  Why did I feel hopeless?

Writing had always been my joy and my solace.  Even as a kid, when I was upset or sad I made up a story, put words on paper and wrote the happy ending I wanted.  Now I felt done.  Stalled.  Stuck.  Every sentence I tried was awkward, wrong, stilted. I was second guessing, third and fourth guessing myself.

I’d spent three years writing a 468-page new novel about a birthday party clown.  I was happy with it.  I thought it was funny.  Charming, even.  I’d been to Las Vegas to the Clown Convention.  I had interviewed clowns and done a “ride along” to a birthday party.  I love clowns.  I thought everybody did.  There was romance—with a magician—and intrigue with a jealous clown.  I was sure it was a blockbuster.  But when I sent the draft to my agent it took her three months to get back to me.  When I finally called her, she said she hated it so much she didn’t even finish it.

“Clowns?” she said.  “Nobody likes clowns.  You need a breakthrough book.”  And then, like a knife in my heart, she asked, “Why do you have to be so weird?”

Yes, I’d written a book about a woman who covers herself in a blue bag to talk to a man about beauty; another about sisters and spontaneous human combustion; the last about a cop who collects suicide notes.  To me, clowns seemed downright commercial.

To make a not very long story even shorter, she dumped me.  She said this book was not going to help my career.  In fact, she was sure I’d never get it published.

I hung up the phone, cried, and put the book in a bottom drawer.  A few days later, I tried starting something new and that’s when I froze—completely.  I couldn’t get her voice out of my head telling me I was weird.  And that I needed a bestseller or my career was over.  I couldn’t make my hands move on the keys.  And the writing that had been such a comfort to me now made me feel as if I was wearing a suit made of industrial grade sandpaper—on the inside.

Three months later—three months of not writing—here I was, standing next to that stuffed crow, waiting to see the curandero.  He came out from a backroom through a beaded curtain.  He was young, handsome, more Ricky Ricardo than Dumbledore, with white straight teeth.  He wore a gray silk shirt unbuttoned to his chest, nice slacks, expensive shoes.  The witch doctor business was obviously working out for him.

He led me to a card table equipped with Tarot cards, some candles, a few bunches of herbs. He had me shuffle the cards, pick nine, lay them out in a specific order.  He told me I have two children and that they are good kids.  He was right.  He probably took one look at my jeans and sneakers and knew I was a mom; my Volvo wagon was parked right out front.

He said a few interesting things about my past, my fractured childhood, my unhappy mother.  Okay, that was good.  I was impressed.  But it wasn’t what I was there for.  At the same time, I didn’t want to ask my friend to translate my desperation.  I was embarrassed that I had so much—healthy kids and a strong marriage, a working husband—and wanted something as trivial as a career writing stories.  Who was I to ask for more?

I didn’t have to.  The curandero handed me a rock of pink quartz to hold.  He lit a candle and burned some sage and waved the smoke in my direction.  He said I was troubled at work.  Yes, I nodded.  “Si,” practically my only Spanish word. “Si, si, si.” He shook his head.  He turned to my friend and they spoke for a moment in Spanish.  My friend shrugged.

The doctor took my other hand.  His was warm and smooth.  “One thing,” he said in heavily accented English.  “You do one thing.”

I waited.  I didn’t understand.  My friend translated the rest. “He says you have to give up the fear.  It’s the only thing wrong with your work.  Not talent.  Not ideas.  Fear is the only thing holding you back.”

The curandero gave me the pink quartz to keep on my desk.  He told me to write my name on a candle and light it on my birthday and let it go until it burned itself out.  He also said I should never turn on the electric light in the bathroom, but shower and use the toilet in the dark.  I never really understood that last one, but I did it—still do it most of the time.  Because what he said changed my life.

Give up the fear.

I had to give up the fear.

In the movie version of my life, I would’ve gone home, taken out the old clown book and found an agent who loved it.  I would’ve sold it for a lot and it would have been a huge success, my masterpiece.  My ex-agent would have called and apologized.  And of course in that version, I would never be afraid again.

But that’s not what happened.  I did write another book, but it wasn’t exactly the clown book and it took four more years.  First I re-read the clown book from start to finish.  I decided the only part I really liked—without any reservations—was the last 30 pages.

So I did the bravest thing I’ve ever done writing—I threw away 438 pages and began a new book with the part I liked best.  It wasn’t easy to write, but I kept moving forward.  I still had those anxious, dreadful voices in my head, but most days I was able to push them away and keep writing—even if I thought it was lousy.  Occasionally I had to hold on to that pink quartz rock.  I wrote, “give up the fear” on a post-it note and stuck it to the wall next to my computer.  Some days I had to look at it a lot.

Eventually I had a new draft I liked.  It took a while, but I finally found a great and understanding new agent.  I did a rewrite for her—more time passed—she sold the book, The Care & Feeding of Exotic Pets, to a small press and I was happier than I’d ever been about my work.  And damn if it didn’t get better reviews than any of my earlier novels.

Yes, it’s also a weird book.  A divorced single mother, ex-wife of a game show host, is kidnapped by a young man with a 7-foot iguana.  I’m happy to say there is one clown who makes a brief appearance.  My little homage.

Now Life #6, my fifth novel, is about to come out. It’s about a woman lost at sea both literally and figuratively, a marriage on the rocks, a hurricane of yearning and desire.  Is this my “breakthrough” book?  The bestseller that will save my career?  I still worry about that.  In the middle of the night my doubts all come rolling back.  But the tattered post-it note has become a talisman.  I have finally learned to give up the fear—or at least ignore it.  Most of the time.

Diana Wagman is the author of five novels and numerous short stories, essays and reviews. Her last novel, The Care & Feeding of Exotic Pets (2012), was a Barnes & Noble Discover New Authors selection. Her second novel, Spontaneous, won the 2001 USA PEN West Award for Fiction. She wrote the original screenplay for Delivering Milo, directed by Nick Castle and starring Bridget Fonda and Albert Finney. Her new novel, Life #6, from Ig Publishing, will be available on May 15.