Author Jessica Levine on Writing About Sex: Is It Necessary? 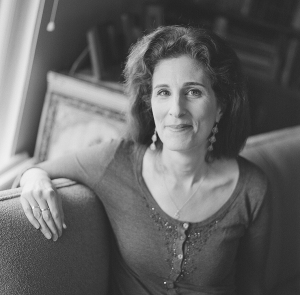 Remember how Thomas Hardy handled the rape of Tess of the d’Urbervilles? Tess is sleeping in the woods when Alec approaches her in the darkness and fog, then the narrator reflects, indirectly, about what is to befall her. There’s a chapter break and, the next thing we know, Tess is a fallen woman.

White spaces worked in the Victorian novel, and they still do. And we know what happens in the sexual act. So why should novelists bother to write about sex? As E.B. White put it in the title of his book, is sex necessary? At this moment in history, when we are bombarded with gratuitous sexual content in movies and video, writers may hesitate to join the fray. And if one doesn’t enjoy exhibitionism, writing about sex can feel embarrassing.

Working on early drafts of my novel The Geometry of Love, I avoided the task. I even had a version in which my characters’ love for each other was unrequited. When I finally wrote the love scenes that needed to be written, I was pleased: I had enjoyed the writing and felt I had created something fresh and interesting. However, when the time came to go to press, the feeling of exposure came up again and I wanted to excise the sex scenes. Thankfully, my agent held me firm with her praise, and I left them in the book.

Consider the power of sex in literature. An erotic scene can arouse a reader sexually, a lyrical one might trigger tears. A funny one can leave you doubled over with laughter. A violent one can induce nightmares. Although writing about sex may feel uncomfortable or redundant in our over-sexed age, it’s worth doing because sex scenes provide the writer with an opportunity like no other to catch and focus the reader’s attention. How can one best use that opportunity? The answer is that sex scenes need above all to serve the novel’s mood and content. In fact, writing about sex is most successful when it deemphasizes the sex itself and focuses instead on tone, emotion, character. This is all the more necessary given that sexual acts — whether passionate or violent, “safe” or the cause of pregnancy or disease — often provide major turning points in plot.

Sexual language is in itself jolting. When Henry Miller wrote Tropic of Cancer he expanded the vocabulary available to literary writers, adding four-letter words and more. And with those words he described scenes, relationships, attitudes that hadn’t been described before. I first read Tropic of Cancer in my twenties and, although I was repelled by its misogyny, I felt that it granted writers an intoxicating liberty to apply language to sexuality. Miller captured the rebellious spirit of American writers of the 1930s who, in decamping to Paris, removed themselves from the puritan atmosphere of the literary culture back home.

Another writer whose treatment of sex made an impression on me in my twenties was Richard Wright. The sequence in which Bigger rapes and murders Bessie in Native Son remains burned in my brain although I read it decades ago. I remember not the choreography of the scene but the sense of an abandoned tenement engulfed by moral and emotional despair, of a man dehumanized by racism and poverty, of a woman stripped of power. The crime committed becomes symbolic of the hell of Chicago’s South Side with its abandoned tenements and lawless subculture of violence.

The depiction of sexual violence in literary fiction often serves the author’s indictment of the attitudes and systems at its source, whether they be racism and sexism, as in Native Son, or the vicissitudes of ethnic conflict, as in Khaled Hosseini’s The Kite Runner. In that novel, set in the tumultuous context of 1970s Afghanistan, an older boy rapes a younger one, whose best friend stands by as a passive witness when he could have prevented the assault. The two friends, whose relationship had transcended ethnic differences, are forever alienated from each other by this betrayal. Often interpreted as a story about guilt and redemption, The Kite Runner also explores structures of social and political power: the victimized boy is a servant and the friend who could have saved him belongs to the well-to-do family employing him. What is the responsibility of those in power to defend the subjugated? Can amends be made once a life has been destroyed by sexual assault? The questions raised go far beyond the violation that has taken place.

Formally, there is always something new that can be done in writing about sex. Martin Amis’s The Pregnant Widow focuses on the sexual obsessions and activities of twenty-year-old protagonist, Keith Nearing. The narrator, who repeatedly calls the sexual act “the indescribable deed,” ends up describing his encounters by relating the conversations held during them. The result is something I haven’t run across elsewhere in fiction–sex scenes rendered through dialogue and only dialogue. What could be more literary than this¾sexual activity reduced to the linguistic utterances it elicits? It’s as though the room were pitch-black, and all we can do as readers is eavesdrop as we imagine what is happening in the fiction of the lovers’ physical union.

With a few exceptions, like Anaïs Nin, the literary treatment of sex was in the twentieth century seen as a male province until the publication in 1973 of Erica Jong’s Fear of Flying. As sexually explicit as the works of male authors like Miller, this novel was considered a trail-blazing, feminist literary manifesto. Isabella’s quest for the “zipless fuck” came to represent the Sexual Revolution because of her desire to have the kind of sex men supposedly want and get ¾ casual, quick, fulfilling.

However, many episodes in this novel stage the humorous anticlimax that happens when sexual fantasy bumps up against reality. For example, when the married Isabella and her would-be lover, Adrian, drive to a hotel hoping to have adulterous sex for the first time, they get lost on the way so many times that, once they’re finally in bed, Adrian is too exhausted to perform. The drive to the hotel, full of dirty talk, recalls the passage in Madame Bovary in which Emma is seduced in a carriage galloping madly around the city of Rouen. Like Emma, Isabella has been raised on romantic myths and misguided by them.

And, much like Madame Bovary, Fear of Flying dives into the huge chasm that exists between sexual fantasizing and what happens when you act on those fantasies. Sex, when Isabella does get it, never assuages the enormous needs that propel her through life. And when an opportunity for an actual zipless fuck with a stranger on a train presents itself, she is repelled. As Isabella explores her freedom, she is repeatedly disappointed. The book is still highly readable today because Jong turns her protagonist’s disillusion into a creative romp satirizing received ideas about women’s sexuality, with Freud as a special target.

Whether a sex scene is violent or erotic and pleasurable, it can make an outsized impression. Writing about sex consequently has a special ability to distort time both for the reader and for the characters in a story. In Susan Minot’s novel, Evening, the narrative alternates between the deathbed of Ann Grant Lord, age sixty-five, and a retrospective of her life. Going backward in time, Ann remembers obsessively a weekend forty years earlier when she fell in love with a man she met at a friend’s wedding. The scene in which that passion is consummated goes on for pages and pages, with every gesture described in minute detail. The description, lyrical and exquisite, creates an almost surreal slow-motion effect, giving the reader the sense of events spilling out from the temporal container in which they occurred. And this is indeed what has happened in the consciousness of the protagonist, who is obsessed with her memories of that encounter.

When I sat down to write the sex scenes for my novel The Geometry of Love, all these readings and more gave me a sense of how much range writers have in addressing sexuality. My main aim was to have the love scenes serve the development of character and plot. The protagonist, Julia, is stuck in an unsatisfying relationship and yearns to be with another man. Unable to act because of her loyalty to her partner, she ends up, early in the novel, sleeping with a third man, an old friend whose sense of humor undoes her defenses and opens her up to the possibility of exploring other relationships.

The scene needed to be playful as Julia can only shed her paralyzing gravity by laughing her way out of it. The encounter, which takes place in an old Volkswagen bus parked on a farm, is comically interrupted first by a goat butting up against the van door as it tries to climb in, then by a drive to a drugstore to pick up condoms. In contrast, when I staged a later sexual encounter with Julia’s soul mate, I used poetic language to emphasize the intimacy and eroticism of the moment. In the thick of the adventure she has embarked upon, Julia ultimately embraces her deepest feelings and allows them to inform her life.

In the end, because of the way it grabs our attention, writing about sex will have a disproportionate impact on readers. Language will be noted, scenes will be taken as symbolic of a character, time, or place, and emotional impact will be high. Writers can take advantage of these opportunities in order to create powerful and memorable works. Writing about sex in fiction consequently becomes the opposite of gratuitous: it becomes a valuable tool for charting human experience and experimenting with the ways in which language can record it.

Jessica Levine’s stories, nonfiction, poetry, and translations have appeared in Green Hills Literary Lantern, The Huffington Post, Poetry Northwest, representations, North American Review, The Southern Review, Spoon River Poetry Review, and many other places.  She earned her Ph.D. in English at the University of California, Berkeley. She is the author of Delicate Pursuit: Literary Discretion in Henry James and Edith Wharton (Routledge, 2002) and has also translated three books from French and Italian into English. Her first novel, The Geometry of Love, was published by She Writes Press in April 2014 and has received glowing reviews from Foreword, Booklist, and other publications. You can find links to some of her online work at http://www.jessicalevine.com.