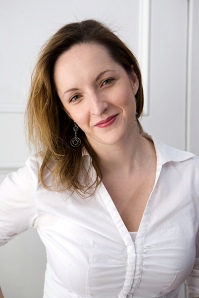 Rebecca Makkai is the author of two novels, The Borrower (2011) and The Hundred-Year House (2014), as well as many short stories and essays. Her story “The Briefcase” has just been anthologized in Houghton Mifflin Harcourt’s new high school literature textbook, Collections. She is a smart, observant, and sharp-witted woman, and it is reflected in her writing. (You can read my review of The Hundred-Year House here and my interview with her here.)

In this essay, she addresses an issue that continues to bedevil smart, accomplished women, especially writers.

Few things have spoken to my soul like Rebecca Solnit’s 2008 essay “Men Explain Things to Me,” the essay that indirectly gave rise to the term “mansplaining.”  And it’s no coincidence that Solnit’s key anecdote was about publishing – specifically, about a man not understanding that the seminal book he was lecturing her on was actually one Solnit herself had written. Although mansplaining exists just about everywhere, there seems to be something special about the writing world – maybe it’s that women are, you know, using their voices – that brings out the closet mansplainer. When women articulate issues within the publishing world, or issues they’re facing in their own careers, there’s always someone there to explain that this is not a real problem, or that the solution is oh-so-simple.

Of course #NotAllMen are mansplainers. Of the male writers and critics and bloggers I associate with, I’d put it at around 2%. But all it takes is one person peeing in the pool.

These are the varieties of literary mansplaining I see on a daily basis, both online and off:

“Let me tell you how the publishing industry works.” I get this one not from fellow writers, but – far worse – from acquaintances whose knowledge of publishing is limited to an article they read two years ago about Kindles. “You get a bigger percentage of sales from ebooks,” they say. “So you should be happy!” Or they’ll tell you about the one and only novel they’ve read in the past two years, and act shocked that you haven’t heard of it. “It’s very important! Read it and get back to me and tell me what you think.” And I’m always so grateful for this, because I have nothing in my to-read pile! I’m fresh out of ideas!

“Stop being surprised” / “What did you expect?” In which a woman says / posts / writes about something truly troublesome – unfair VIDA numbers, let’s say, or Amazon hijinks, or academic sexism, or a rat infestation at a writers’ colony — and a man eagerly jumps in to comment with something like “Yep. Get used to it. Them’s the breaks.” Which really adds nothing at all to the conversation, when you think about it. It’s simply a way of saying “Oh, yes, this issue? I’m five steps ahead of you on this issue. Ha-HA!”

“Just lighten up / give up / grow a pair” A close cousin to the above, with the lovely addition of moral judgment against indignation. If the criticism had come from a man, it would be righteous anger, or thoughtful analysis, or warranted fury. From a woman, it’s irrational and shrill and must be stopped. (The giveaway here: the true mansplainer can only avoid use of the word “hysterical” for about twenty seconds, and/or three tweets. Hang in there long enough, and it’ll come out.)

“This wouldn’t be an issue for you if you would just…” …write more book reviews, write more nonfiction, write more commercial fiction, change your name to something more pronounceable, go with a smaller publisher, go with a bigger publisher, accept that critics are jerks, ignore the haters, ignore your editor, ignore your reviews, stop caring about your career, stop thinking about it too much. Oh. I hadn’t thought of that.

“Here is my writing advice, o world!” This is a subtler and more insidious one – an exercising of privilege that is surely invisible to the privileged. Certainly there are times (like, you’re hired to speak to a conference) when an audience is waiting with bated breath for your wisdom. But shouting out, unbidden, on social media, your lesson of the day (“Here’s a little craft tidbit for you, folks…”) – I don’t know how to explain that it’s a manifestation of gender privilege except to say that I see men do this on a daily basis, and I’ve never, ever seen a woman do it. And come to think of it, I’ve only ever seen white men do it. Straight white men. Hmm… (1% of them, at most. But boy howdy are they loud.)

“Despite never having read your work, I’m going to assume that whatever issues you’re facing in the publishing world are due to the fact that you must be writing ‘domestic fiction,’ which – hey! – should certainly be given its due! I read an Alice Munro story once, and I loved it!” Sure you did. Also, define “domestic fiction.” Fiction with a house in it? So you mean, like, The Corrections? No?

“Let me explain how much I’ve done for you, female writer.” This can range anywhere from the benign but egocentric (“I’m so glad I wrote that one review of Alice Munro for the Winnipeg Free Press during the Reagan Administration, because look where my patronage has gotten her!”) to the deeply disturbing (see: the recent saga of Ed Champion). Toward that more disturbing end, there are some male bloggers and critics out there who seem to see praising women writers as the equivalent of buying your date a fancy dinner in 1962. In both cases, they seem to expect something afterwards. Eternal gratitude? Instant acceptance? Love? Sex? It’s hard to tell. And in cases like Champion’s, if perceived “favors” are not returned, the critic turns vicious.

“Ah,” someone out there says, “that’s right. I remember reading about this in a magazine. When women complain, they don’t really want their problems solved. They just want to vent. They want someone to listen to them.”

No, asshat. We would love the problems solved. All the problems. It’s just that unless you’re my editor or my agent or my department chair, you’re not the one who’s going to solve them. You aren’t saying anything we haven’t already thought of. No one, male or female, wants someone to come in and pat them on the head and tell them the solution is actually very simple, and the solution is to stop worrying about it. Would you do that to a male colleague? Would you – on the roughest days of your life – want someone doing that to you? The difference between the sexes here isn’t that women want shoulders to cry on. It’s that only women have to put up with people handing them facile and belittling solutions (that aren’t really solutions) to their problems.

So… What to do? If you’re a woman, you already know your choices. Keep your head down and ignore it, or stick your neck out and fight it.

If you’re a man, a regular, fabulous man, keep being awesome. But if you think you might be guilty of mansplaining: Ask yourself, honestly, if this is what you’d say to another guy. If you’d accuse him of hysterics, if you’d attempt to explain the world to him, if you’d assume that because you praised his book once, he must owe you undying gratitude. Or if you’d think that his problems must not really be problems, or feel so proud of yourself for offering the most reductionist solution.

And if you still can’t help it, try to use your mansplaining powers for good, rather than evil. Best Buy is always hiring.