Guest blogger Jennifer duBois: Books to read when you have no time to read 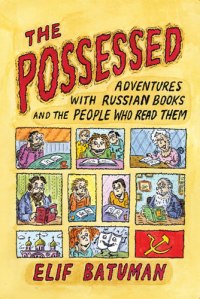 Jennifer duBois is the recipient of a 2013 Whiting Writer’s Award and a 2012 National Book Foundation 5 Under 35 award. Her debut novel, A Partial History of Lost Causes, was the winner of the California Book Award for First Fiction and was a finalist for the PEN/Hemingway Prize for Debut Fiction. Her second novel, Cartwheel, has been nominated for a New York Public Library Young Lions Award [see my review here]. Jennifer earned a B.A. in political science and philosophy from Tufts University and an M.F.A. in fiction from the Iowa Writers’ Workshop before completing a Stegner Fellowship at Stanford University. Her writing has appeared in such publications as The New York Times, The Wall Street Journal, Playboy, The Missouri Review, Salon, The Kenyon Review, Cosmopolitan, Narrative, ZYZZYVA, and has been anthologized in Imaginary Oklahoma, Byliner Originals’ Esquire Four andNarrative 4’s How To Be A Man project. A native of western Massachusetts, Jennifer currently teaches in the MFA program at Texas State University. Read my interview with Jennifer duBois here.

Last fall, I began my first full-time graduate teaching job in the same month that my second novel, Cartwheel, was released—and suddenly, after years of being spoiled for time for my own reading or writing, I found myself with almost no time for either. Part of what was strange about this was that I was still surrounded by words. I was reading student work and admissions folders and books to teach or blurb; I was writing blurbs, as well as marketing essays and blog posts and recommendations and student workshop letters.

There came a point when I began to feel that my engagement with text had become almost entirely meta; virtually all of my reading and writing was about reading or writing. Whenever I encountered an author Q+A that asked me what I was writing or reading, I was always tempted to answer, “This Q+A.”

In what came to feel like a nearly symbolic gesture, I still tried to steal a few minutes each week for a couple of pages of non-required reading. This piecemeal, microscopically fragmented approach is not a great strategy for most novels (I might as well take this moment to publicly admit that, as of this writing, I have been reading Anna Karenina for 15 months).

But in this episodic, tortoise-slow fashion I did, over the course of the year, finish two terrific books that I’d recommend to everyone who, for whatever reason, finds themselves scrambling—for time to read, time to imagine the world beyond their own, time to reflect on the one within them—which, at some point or another, is all of us: Consolations of the Forest: Alone in a Cabin on the Siberian Taiga by Sylvain Tesson and The Possessed: Adventures With Russian Books and the People Who Read Them by Elif Batuman.

I found these books deeply engaging and sustaining—in very different ways, though perhaps for fundamentally similar reasons. Both are essayistic memoirs broken into relatively short episodes, making them easy to read in small sections, or to put down and return to much later (in a way that Tolstoy, it turns out, is not). They are both travelogues, of a sort: Tesson’s book chronicles the six months he spent alone in a cabin on Lake Baikal; Batuman’s account of her travels as a Russian literature scholar include a summer spent, somewhat by accident, in Uzbekistan. Reading about adventures that lie just a bit beyond your own ambitions is great when you’re feeling swamped and boring; it made me recommit to travel for the future without feeling overly sorrowful that I wasn’t in Tashkent or Siberia right this instant.

Both books are deeply compelling, though wildly different in tone. The Possessed is hilarious and wickedly deadpan; Batuman skewers the affectations of academia, the pretensions of scholarship, and the absurdities of travel with a playwright’s ear for dialogue and a Dickensian eye for the comic minor character. I laughed out loud more while reading it than I have reading anything in quite some time—which is a lot more laughing than you’d expect from a book set substantially at literature conferences.

Tesson’s is, by contrast, a profoundly solemn book—lyrical, deeply reflective, at times nearly aphoristic. Translated from the French with breathtaking precision and originality, Consolations of the Forest chronicles the ways that solitude and proximity to nature profoundly alter awareness—of the physical world, the inner self, and the present moment. For readers struggling to keep track of any—or all—of these things in their own lives, Tesson’s account is especially powerful and haunting. Though the book is under 250 pages, it still took me over six months to read it—snippet by snippet, week by week—and by the end, I found that there was ultimately something grounding about returning to it over and over in this way. Two weeks or a month would pass by in a blur, and yet when I picked up the book, Tesson would still be out there in Siberia—alone on the lake with his little dogs, watching the light on the snow.

Consolations of the Forest and The Possessed are gems—both totally unique, hugely absorbing, and narrated with the kind of intelligence that’s so distinctive it’s impossible to feel entirely alone while reading them. In moments when our lives feel too full of one thing, these books remind us that the world is full of many things—and, in moments when we may need reassuring, that it really is still out there.