OF BIRDS AND LOVERS works its magic with prose-poetry 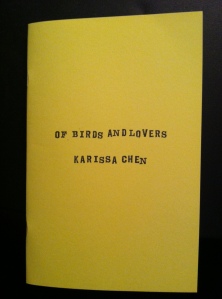 Of Birds and Lovers (Chapbook)

Karissa Chen is a magician with words, a poet who turns prose into astonishing images and emotions, from the surreal to the sublime. Her chapbook of five stories, Of Birds and Lovers, will captivate you and hold you spellbound. Reading her short, delicate, yet powerful stories is like floating in a translucent bubble that, rather than being ephemeral, floats long distances, allowing you to view the world as if you are part of it and yet removed into a silent sphere.

Of Birds and Lovers features three stories with the tone and voice of fables or parables, bookended by two stories depicting the progress of modern relationships. The collection opens with “Long-Distance Lover,” which follows a young woman as she goes through her day thinking about her absent lover. It is unclear whether she is still in love with him or feeling conflicted as she considers whether to break up with him. Is she on the edge of both emotions? Will something happen this day that will shape her decision?

“I went to a bar and composed the sentence I would use, counting my words like pennies,” the narrator tells us. The desire to learn what that sentence is impels the reader to the last line of the story, which reveals parts of each sentence but leaves unresolved which one she chose to say to her lover.

The closing story, “Postcards to a Man Who Will Not Tell Me He Hasn’t Cheated on Me, or A Year in Birds,” comprises nine “postcards” to the man of the title, in each of which a bird plays a key role, either actual or symbolic. These cards capture the changing state of mind of the narrator and the evolution of the relationship.

In the first postcard, “flight,” the narrator walks along the beach, observing the color of the ocean, and tells us, “Today I saw a couch, shit-covered and moldy, sitting lonely on the sand. Left by somebody who once thought it perfect. I sat upon its salt-drenched cushions, pressed my hands into its springs.” A clearer evocation of a mistreated or abandoned lover is hard to imagine.

In the second postcard, “murmurations for longing,” the protagonist describes the fascination she and her lover once had for the flight formations of starlings. “I’d like to pluck a single black bird mid-swirl. Ask him if he knows what their ribbons look like swimming across the sky. I suspect he would cock his feathered head, his beak ajar, uncomprehending. I only have eyes for those I long for, he would say. I was just trying to fly closer.”

In “red envy,” about jealousy, the narrator observes a cardinal and “his two female friends” perched on a snow-covered branch. “I remember the first time we kissed, caught in a bird blind. A cardinal rested right in front of us, whistling melodic calls to invisible friends. I watched, seeing you understand something that seemed to matter, and I envied you, and the birds.  I wanted to know what you knew, to have what the birds had.”

“ribcage as birdcage” finds the postcard writer sitting on a guesthouse porch listening to Mynah birds calling each other heart. “The trees are ripe with their bodies. I think of you, oceans away, and I wonder how, in one place, love and loneliness can coexist. How the two push up against each other in the landscape between mountains, but also in the empty space between breaths.” Anyone who has ever missed the one they love knows this feeling of love and loneliness coexisting uncomfortably. But few have captured it so well in words.

The narrator tells us in “freedom” that “[y]esterday was your birthday, and I remembered not to call you.” The series of postcards ends with “i is for indigo,” in which the writer describes visiting a marsh favored by the ibis, which she notes “is more indigo than black, did you know that?” She knows nothing about them but loves their “violet hues.”  As the day ends, she notes in the last line of the postcard, “At sunset, I saw the ibis rise up alone, slicing the orange sky.”

As gentle and thought-provoking as the opening and closing stories are, the middle three stories that form the heart of the collection are even more unusual and haunting. “Decency” and “Eclipse” are written from the first person plural perspective, as members of communities, one small and one possibly planet-wide, observe events that surprise and even shock them.

In “Decency,” the narrators describe a young family they find unorthodox and thus suspicious. “The man was tall and handsome, a courteous fellow whose dimpled smile made the younger of us giggle and the older of us blush. His wife wasn’t unattractive, but we agreed she had an unruly look about her, hair too blond and curly to be properly modest, chest straining against her too-tight shirts. We didn’t trust her. Though she was always civil when we passed, we knew there was something off. It was in the way she walked around like a ghost, her child pressed against her.” Stories soon begin to circulate about the couple, who seem ill-suited to each other.

The tension comes to a head when a traveling fair comes to town. Things begin innocently enough. “We marveled at the oddities brought from the fair’s travels – eagle charms carved from bright blue rock, mechanical arms that flipped eggs in a frying pan. We traded our own goods – quilts, pottery, wooden toys – and the children ran around ogling sweets and trinkets. Then, as the sun set, we sat beneath the strings of light bulbs winking in the balmy summer air and clapped our hands along to the brass of the traveling band.”

Chen’s ability to capture the nature of this community and the strong sense of place are masterful. It seems as if we are reading a very old story, recently discovered in an attic or an archive. Her wonderful sentences seem to have always existed, written as if they had been carved from ancient precious stones. They demand to be read aloud.

When the couple and their child appear at the second night of the fair, the members of the community are appalled.  “We hadn’t expected the family to show. We hadn’t invited them…. Nobody greeted them when they sat themselves down at a rickety table in the corner. We were embarrassed for them. Couldn’t they tell we knew their marriage was a sham?” What happens next, innocent by most standards, only serves to confirm the community’s rigid concepts of sin.

“The Emperor’s Malady” is pure pleasure to read, a brightly polished story that feels like a classic European tale from centuries long past. The emperor suffers from one inexplicable malady after another, to the consternation of the royal physicians, who are unable to cure him. “Soon the effort spread through the entire kingdom. The people of the land were asked to put aside their personal woes. Wars were abandoned. Taxes forgiven. Achievements forgotten. Instead, all the Emperor’s subjects worked in hopes of ridding their leader of everything that ailed him.”

But the emperor’s affliction is one that the physicians and subjects alike are incapable of curing. When the Emperor explains that he has only been afflicted with one malady before and reveals its name, the physicians do not understand. Ultimately, though, the story reveals that out of the Emperor’s circumstances comes hope for the people of the kingdom.

Chen does not tie up every loose end in her stories, leaving some questions for which the reader must provide his or her own answers. As a result, these stories will take up residence in your mind, and the characters and their dilemmas will continue to preoccupy the thoughtful reader.

Chen graduated from Barnard College and earned an MFA at Sarah Lawrence College. She is currently the fiction and poetry editor of Hyphen magazine. Her stories have been published in Necessary Fiction, Monkeybicycle, Kartika Review, and The Good Men Project, among other literary journals and websites. One of the stories in this collection, “Decency,” was published in The 13th Annual Writer’s Digest Short Short Story Competition Collection in June 2013 after finishing fifth in the contest.

For more information about Karissa Chen and to purchase Of Birds and Lovers, go to www.karissachen.com or the publisher’s website, CorgiSnorkel.com.