Three writers who express a multifaceted creativity through art

We all know writers are talented people. They create characters, conflicts, and entire worlds in their imagination and then somehow — magically, to most of us — they turn it into a story or a novel. So it shouldn’t surprise us that people with such impressive creativity are multi-talented. Over the past couple years, as I’ve gotten to know many writers through various social media, I’ve discovered that one example of this expansive creativity is an artistic gift. In particular, I was impressed by the artwork of Marcy Dermansky (The Red Car, Very Nice), Yi Shun Lai (Not a Self-Help Book: The Misadventures of Marty Wu), and Monica McFawn (Bright Shards of Someplace Else: Stories). In this article, I interview the first three writers about combining writing and art.

MD: Definitely the writing. I have always thought of myself as a writer. I started writing in elementary school. I went to graduate school for writing. I began publishing short stories and then moved on to novels. The art is a relatively new thing, four or five years now. I started drawing and then moved up to water colors after the birth of my daughter Nina. We would be doing art together and she would draw so I would draw, too. Otherwise I was bored. I started out copying illustrations from her pictures books and I discovered that I really enjoyed it. And that the drawings were good. I hung them up on her wall. And after a while, I moved on from Pete The Cat to flowers and people on the subway. 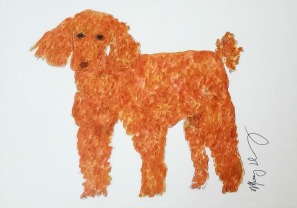 YSL: The writing definitely came first, then the art, although I’ve always wanted to draw, to find a different way to represent what I see. Working with words all the time is burnout city, for sure. All the way back to childhood, I can remember trying to get better at this visual representation. There are some examples of really bad art. And then when I was in my 20s, I made some things for some guys I was dating. I think I thought they were good. One of the guys still has the thing I made for him, so I guess that’s something. But I didn’t start doing this in earnest until three years ago. (Facebook could tell me!) There’s a theory that says your brain doesn’t hand you things to work on until it thinks you are holistically ready. I guess I’m an embodiment of that. I cultivate it by practicing when the mood strikes me, but also, I have a Craftsy account, which is an Internet thing where you can take classes on the Internet in asynchronous fashion. At some point I’ll outgrow it. Right now, I’m “taking” watercolor “classes” from a book that promises 30 days to watercolor. Ohhhhkay. Whatever. 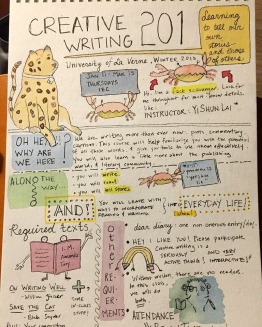 MM: I’ve always drawn, but for some reason it took until very recently for me to take it seriously. As a kid, I’d draw comics in pen and ink, and I always got the sense that’s where my talent ended. Like lots of people, I thought artistic ability was more of a fixed trait, so when I appeared to be more precocious as a writer, that’s what I pursued. I did publish a chapbook (A Catalogue of Rare Movements, Xerolage Press) that included some drawings I collaborated on with a painter, Curtis Rhodes, but I felt like my contributions were amateurish in comparison. 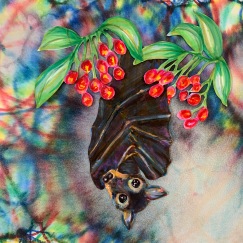 MD: It is much easier for me to make a drawing than sit down to write. Perhaps this is because I don’t think of art as my actual talent. There is no pressure. It just feels good to do. I also love that – for me – a painting takes a short amount of time. And then, I am done, And I have something pretty. Something I can give as a gift. Or frame and hang on a wall. I do that. If it doesn’t come out, that’s okay, too. I genuinely love to write but for some totally bizarre reason, four novels in, I still find sitting down to do it daunting. I really have to get over that. 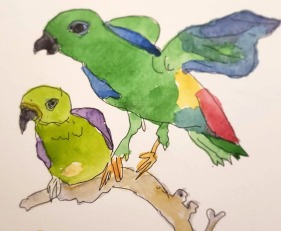 YSL: When I see things that strike a nerve. I never know what it’s going to be, but it’s like writing—if I can’t get rid of the idea as a drawing, then I try to draw it. I like anthropomorphizing animals. That’s a fun thing, and my drawings seem to all run in that direction, if I’m not doodling things I just see and feel the need to note down in some fashion other than with words. 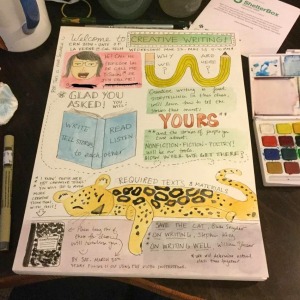 MM: When Trump was elected, I found myself doubting words themselves. Words could be misconstrued, twisted, weaponized, wrung of their meaning, made ineffectual. The writing I once did—painstaking literary short stories, often on dark themes—no longer represented what I wanted to bring into the world. There was enough darkness already. I didn’t know what I wanted to write instead, and I felt frozen as an artist, more concerned with trying to comprehend the world than adding more to it. Instead of making new work, I decided to retrain myself as a writer and artist. Even though I’d had success as a fiction writer, my writing process was slow, labored, and often joyless. I wanted to not only learn new forms of art, I wanted to unlearn the bad feelings—the perfectionism, the pressure—that often accompanied my current process. I started studying comedy at Second City, and I bought a notebook and some markers. I wanted to see what I would make if I had new ways of making. 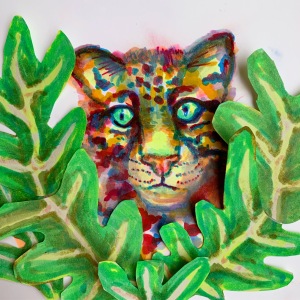 MD: I honestly don’t think that touch on each other. I kind of don’t feel that I express myself with painting. I mean, I love to draw. But with writing, I go into my character’s heads and what they think and what they feel. I process living in this world through my writing. I don’t think my drawing goes as deep as that. It seems more surface to me.

YSL: Art is just another way of seeing. It doesn’t inform my writing, really. It might complement it, and open the pressure valve a little.

MM: The comedy writing and drawing dovetailed right away. I took improv classes at Second City, which taught me to commit to an idea and find the fun in making it work, rather than endlessly doubt my initial impulse. Because I draw in marker, I likewise need to make it work if I misdraw a line. There’s no delete button on the improv stage nor on the sketchbook page, but there is liberation in that. When I started drawing more regularly, I began drawing pen and ink silhouettes of women, circled by ornamentation as if they were part of a broach. Every time I “messed up” one of these drawings, I would turn the drawing into an “egg” — an abstract oval circling the misdrawn face. I forced myself to finish every drawing I started, and I soon found that the “eggs” ended up more interesting than the drawings that had gone smoothly. 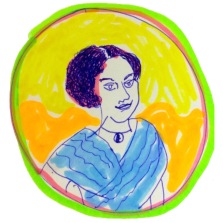 MD: I don’t feel confident enough in my art to do the book cover. I want a professional graphic designer. But I have been approached by two friends now to work on children’s books together. They do the writing and I make the illustrations. It hasn’t happened yet but I can imagine it happening. I just need to commit. One fun thing: I made a small water color painting of a standard poodle based on the poodle in my new novel Very Nice and my publisher printed beautiful cards.

YSL: I have considered making a book of my artwork, but that’s a long way away. I did consider designing my own cover, and then that idea got rejected by wiser friends and my even wiser publisher: “Do you really want that added stress?” they said. 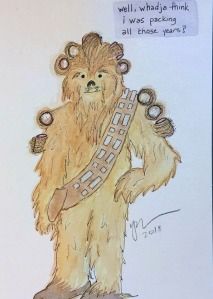 MM: The methods I used to mask mistakes in my visual art became part of my style. To cover up a problem, I’d often cut the drawing out and place it in a new composition or cover the spot with a scrap of paper. I started to become fascinated with creating depth in a piece—both through layering paper and through shading the drawings. Within a year’s time, my drawings completely transformed from flat and cartoonish to painterly and faceted. Not only that, but the process of making visual art was joyful. I was never a prolific writer of short fiction, but as a visual artist my output is nearly nonstop. By discovering a process that integrated and welcomed mistakes, I found the pleasure in making again. 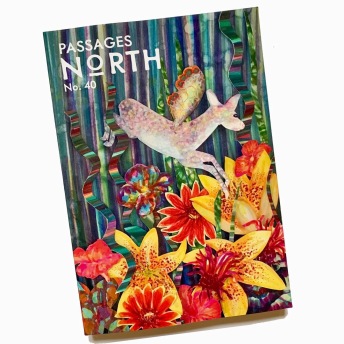 MD: I once sold a painting that I posted on Instagram. That was a surprise. Fun. I had trouble figured out a price and then did not ask for a lot of money. I donated another painting to an auction for a literary magazine. I frame my drawings and hang them in my apartment, and they give me great pleasure. I have also given paintings to friends and family. I have been told by people before that I should consider selling my work, setting up an Etsy page, but in my mind, I am still a writer and that is where I want to focus my energy. I find it incredibly gratifying that you wanted to interview me for this series. 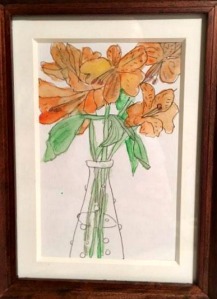 A Marcy Dermansky watercolor sits on my family room bookcase.

YSL: Yes, to both. I give some artwork away. I’ve done a number of commissions. I think my clients are all happy. I wish they’d tell me if they weren’t. 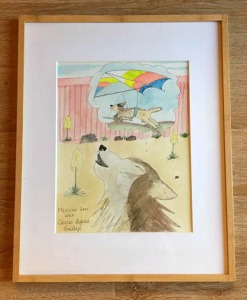 MM: I think of my drawing ability like a plant I forgot about at the back of the garden. While I spent years tending to and cultivating my writing talent like a precious flower, my drawing talent, fed by storms and runoff, grew wild behind the shed. When I see my visual art now, I see work that is unfussy, rough, and exuberant—a combination of self-taught naiveté and maturity, a talent that somehow grew despite all those years left alone. 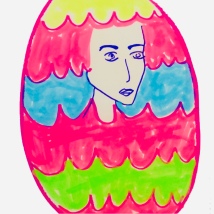