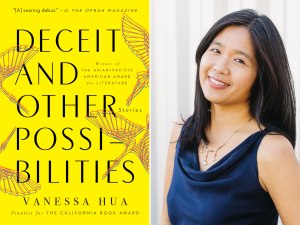 Deceit and Other Possibilities: Stories

Vanessa Hua received a lot of acclaim for her debut novel, A River of Stars, last year. But I first heard of her when this collection received an Asian/Pacific American Award in Literature and was a finalist for a California Book Award a few years ago. Rave reviews by Gary Shteyngart and Laila Lalami convinced me that Hua was a writer worth knowing. And they were underselling these stories.

Deceit and Other Possibilities is the best short story collection I’ve read in quite a while. It was originally published by Willow Press in 2016 but has just been reissued with three new stories by Counterpoint Press.

These 13 stories concern characters struggling with their immigrant identity and resulting life choices: an elderly immigrant from Chinatown forced to return home after 50 years (“The Older the Ginger”); a Korean-American teen who finds an unusual way to become a student at Stanford in order to satisfy his ambitious parents (“Accepted”); a young Chinese-American celebrity from Hong Kong who returns to Oakland following a sex scandal (“Line, Please”); a Korean-American pastor doing missionary work in East Africa whose intentions are not as good as they seem (“The Deal”); and a Mexican immigrant boy whose parents are torn between the present and a possible future (“What We Have is What We Need”).

In the ostensible title story, “The Responsibility of Deceit,” Calvin and Peter escape San Francisco to enjoy a weekend in Napa. Calvin plans to visit his parents in the East Bay on the way home, as he does every Sunday. Will he drop Peter off at the nearby BART station to head home while Calvin has dinner with his family? Or is Calvin ready to introduce his boyfriend to his very traditional Chinese-American parents?

Hua is a masterful writer. Her stories feature a finely-honed sense of characterization, an ear for realistically quirky dialogue, and a direct, occasionally acerbic tone that doesn’t completely hide her sympathy for these very human characters.