Mary Fleming: On representing the real Paris in THE ART OF REGRET

Few would deny that Paris is a city of fairy-tale beauty. Beyond its famous monuments –Notre Dame or the Musée du Louvre or the Sacré Coeur – even the smallest street can cause an explosion of visual pleasure. It’s a beauty that, despite the city’s advanced age, does not grow old. It certainly hasn’t for me, even after well over 30 years of living here. In fact, hardly a day goes by when some sight – the morning light on the sandy stone or a glint off the river Seine – doesn’t stop me dead in my tracks and fill me with wonder.

While all this splendor is easily accessible to visitors, there is of course much more to Paris than meets the uninitiated eye. It is also a city of locked and coded doors. When, for example, a friend visits or a parcel is delivered to my Paris apartment, the list of instructions is extensive. Punch in the code 1234A on the panel next to the street door. Then walk under the porte-cochère and into the courtyard. You’ll see a staircase on the left. Scroll until you find 3ème étage on the interphone and ring.

Fortunately, the effort is worth it. Behind the façades and beyond the fortifications are unexpected and complex worlds, some of which I try to expose in my novel The Art of Regret, through the story of Trevor McFarquhar, an American who has lived in France since he was eight years old. As Trevor grapples with a past marred by the deaths of his sister and father, the reader learns quite a lot about his Franco-American Paris world. What happens, for example, behind the metal grille of Trevor’s bicycle shop Mélo-Vélo. Or through the cobbled courtyard in the hôtel particulier where his mother and stepfather live in the 7th arrondissement and where the code on the street door, B1207, is the birth date of the owner’s long-dead horse. Or the house and remnants of a vineyard at Montmartre, tucked behind a typical Paris building, where his friend Béa has a studio.

A city’s architecture is to some extent a reflection of its residents’ psyche. And like their buildings, Parisiens are not easily accessible. Getting past their façade of elegant clothes and good haircuts is hard work, partly because they suffer from or are blessed by, depending on your point of view, extreme discretion. In its less attractive form this can feed their reputation for being downright unfriendly, even hostile (though I would argue there has been much improvement on that front in our service-oriented age). The attitude is in part an effort to maintain a distance with the outside world, to keep themselves to themselves. The same is true with people you meet socially or professionally. You won’t become best friends after the first or even the 20th encounter.  But maybe the 21st will do the trick.

Once again the time and effort required are worthwhile. Those locked faces do open up. On a day-to-day level, it’s made easier by Paris’ composition. Though a big city, it is made of very distinct and intimate quartiers that are like villages, meaning you interact with the same butcher and baker every day. Eventually crustiness subsides and they become if not friends at least daily fixtures in your life. The waiter Jean-Pierre at Trevor’s café, inspired by a serveur I knew in my first years in Paris, comes off as gruff but has a good heart. Ditto the concierge of his building, Madame Piquot, also drawn from the real-life gardienne of a building where I once lived, and who takes care of his dog Cassie during a crisis. When you have been through the multiple encounters and made a friend, it’s often for life. Cédric, whom Trevor met at age eight in the schoolyard, is like a brother to him.

Family too is an important pillar of Fr 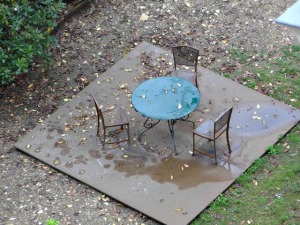 ench life. Since no point in the country is farther than a train ride away, it’s easy for blood relations to maintain close ties. In that way Trevor is much more French than American. Despite complicated feelings about his mother and brother and stepfather, he cannot live without them. His ostracism in the second half of the book makes him even more miserable than his begrudged inclusion in the first. That doesn’t mean relations are generally uncomplicated. Within those French families — who can trace their history back many generations — there are plenty of skeletons in the closet. Since there are several rattling around in the McFarquhar wardrobe, this story of family secrets fits very naturally in its Paris setting.

More specifically, much of the narrative takes place in the 9th arrondissement on the rue des Martyrs, where Trevor lives and works. That is no accident. Beyond the symbolic resonance – Trevor plays the sardonic martyr for the first half of the story – the street is located in what at the time was an unfashionable neighborhood well outside the usual tourist ambit (it has seriously gentrified in the last 15 years). Since Trevor is doing his best to reject all aspects of his bourgeois childhood in the chic 7th arrondissement, he has found the perfect spot to irritate his family and prov

e his difference. But there are plenty of quartiers in Paris where charm is in short supply, or is of a more prosaic nature than the casual visitor may appreciate. The glittering center is not the whole story.

Advanced in age as she is, Paris is often accused of immutability. All that beautiful old stone can reinforce the claim. But again, it’s only part of the story. Paris shares the same challenges of any modern city. During the 1990s, following the fall of the Berlin Wall, there were many migrants like Piotr and Wanda from the former Eastern Bloc who had trouble finding their place and were often treated badly by the natives. Homeless people like Michel are present everywhere (today even more so), including les beaux quartiers like the 6th arrondissement, where Mélo-Vélo moves in the second half of the story. And while boutiques like Trevor’s bike shop can still survive, they are increasingly threatened by globalization in Paris, just as they are anywhere else in the world.

What I hope The Art of Regret shows is that real life in Paris has a magic that is largely hidden from visitors, but it’s no fairy tale. The city has its ugly side, its problems – and so do its residents. Though I feel very fortunate to have lived the longer half of my life in this complicated, multi-layered city, lives lived here are much like anyone else’s.

The Art of Regret (She Writes Press) will be published on Oct. 22. You can pre-order it at all the usual places, which is a great help to indie authors and publishers. For more info on Mary Fleming, visit https://mf.ghost.io/ and https://shewritespress.com/portfolio/mary-fleming/.