In light of the ongoing — and increasing — interest in Emilia Bassano Lanyer as the real author of Shakespeare’s plays and poetry, I thought I would re-run this essay from 2017. In addition to Charlene Ball’s speculative novel, Dark Lady, Mary Sharratt’s novel The Dark Lady’s Mask (2016) also considers this intriguing question.

Most recently, The Atlantic published an article entitled “Was Shakespeare a Woman?” by Elizabeth Winkler in the June issue. (Winkler is a reporter and book critic for The Wall Street Journal and holds a BA from Princeton and an MA in English Literature from Stanford University.)

To be fair, The Atlantic then ran five response pieces from Shakespeare experts, examining various aspects of Winkler’s claim and the authorship issue in general. It makes for fascinating reading. And while I enjoy contemplating theories about alternate authors, I think it’s always worth remembering that “the play’s the thing.” 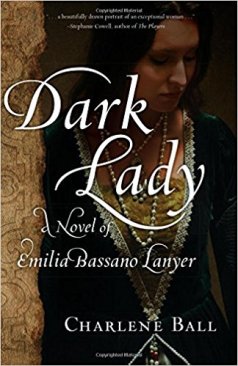 Who was Emilia Bassano Lanyer, and why does she matter?

Emilia Lanyer lived during the time of Queen Elizabeth I and two other monarchs. She published a book of poetry in 1611 called Salve Deus Rex Judaeorum, in which the title poem makes a strong argument for women’s equality. The book also contains the first country-house poem in English, and it is prefaced by dedications to nine prominent women, thus making Emilia the first woman in England to seek patronage and identify herself publicly as a writer. And on top of all this, she may have been the “Dark Lady” of Shakespeare’s sonnets.

I was thrilled when I learned about Emilia. I was in graduate school, and I heard historian A.L. Rowse give a talk about his theory that she was Shakespeare’s Dark Lady. He “discovered” her when he was researching the casebooks and journals of the astrologer Simon Forman, and he decided that she must have been the woman Shakespeare describes. Copies of her book had been languishing for four centuries in several British and American libraries, but Rowse’s 1979 edition of her poems and his claim about her relationship with Shakespeare brought her into the public eye.

However, Rowse’s view of Emilia was basically misogynistic, even though he allows that she was the best woman poet of her age. He called her “a bad lot,” “no better than she should be,” and assumed that she was promiscuous, based on no evidence other than that she had been the mistress of one man, possibly the lover of another, married to a third, and obsessed about by a fourth. Most scholars followed Rowse’s view until the 1990s, when feminist historians and literary scholars began writing about her.

The facts we know about Emilia are these. She was the daughter of Baptista Bassano and Margaret Johnson. Baptista was the youngest of the Bassano family of musicians and instrument makers who were invited by King Henry VIII to come from Venice to be Court musicians in England. The Bassanos may have been secret Jews, converts who outwardly conformed to the Church of England but practiced their religion in secret.

We know from one of the dedications in her book that Emilia was educated in the household of Susan Bertie, Countess of Kent. From the astrologer-physician Forman’s casebooks, we learn that she was mistress for several years to Henry Carey, Lord Hunsdon, cousin of the Queen. She married her cousin Alfonso Lanyer, a royal musician. She was mother to two children, Henry and Odillya. Henry lived to adulthood, became a Court musician, married, and had children. Odillya died in infancy. From Forman, we also know that Emilia visited him in 1598 and again in the early 1600’s for an astrology reading. Forman developed an erotic fascination with her and she seems to have had some sort of relationship with him that stopped short of sexual involvement.

Other things we know from Emilia’s book: she spent time at a country house called Cookham Dean with Margaret, Countess of Cumberland, and the Countess’s daughter, Lady Anne Clifford. Emilia probably served as a waiting gentlewoman or a music tutor. Her poem about the place called “The Description of Cooke-ham” describes her time spent there as idyllic. This poem happens to be the first country-house poem published in English. A country-house poem is a sort of bread-and-butter letter in verse, thanking one’s host for an enjoyable visit and praising their home. Until recently, the playwright and poet Ben Jonson has received credit for the first such poem, although Emilia’s predates his by five years.

Emilia published her volume of poetry, Salve Deus Rex Judaeorum, in 1611, becoming one of the first women to publish a book in England. It contains the title poem (which means “Hail, God, King of the Jews”), “The Description of Cooke-ham,” and dedications to nine noblewomen, plus two more dedications: “To the Vertuous Reader” and “To All vertuous Ladies in generall.” She adds an afterword, “To the doubtfull Reader,” explaining how the title came to her in a dream. As far as we know, Salve Deus is her only book.

What makes Emilia unique as a writer is that, in dedicating her book to nine prominent women, she was seeking patronage the way a male writer would. Patrons would pay an author for a dedication if they liked the work (10 pounds was the going rate). It was rather like applying for a grant from a foundation today. Seeking patronage shows that she saw herself as a professional writer.

Being a professional writer didn’t mean what it does today, by the way; it was not necessarily a path to fame and fortune. Emilia asks the astrologer whether she will become a lady, not whether she will publish a book. Nobility circulated their writings in manuscript, not bothering to publish. Commoners who wrote sought patronage, often with an eye to employment. Shakespeare put considerable effort into acquiring a coat of arms and in buying up land and houses, and not so much into publishing his works. He seems to have wanted to become a gentleman of property, not a poor player and scribbler of public entertainments.

My novel, Dark Lady (She Writes Press, 2017), depicts Emilia and Shakespeare as having an affair. However, no proof exists that Emilia knew Shakespeare. But what if she did? But what if a bold, proto-feminist author also had a love affair with the most famous poet of all?

I wanted to write about Emilia from a perspective sympathetic to her as a woman of her time. So my novel shows her not only as mistress and lover to two important men—one the most famous writer in the world—but also as a thinker and writer concerned with serious issues who published a book when few women did so.

I portray her as a woman, a mother, concerned with economic survival, struggling against misogynistic attitudes and laws that restrict women’s lives. I show how the great events of the time affect her—the Armada, the death of Queen Elizabeth, the Gunpowder Plot. I show how her relationship with the poet from Stratford inspired her to write. And I show how her friendships with other women are central to her life, helping and sustaining her, giving her acceptance and the courage to write her truths.

Charlene Ball holds a Ph.D. in comparative literature and has taught English and women’s studies at colleges and universities. Although she has written nonfiction, reviews, and academic articles, writing fiction has always been her first love. She has published fiction and nonfiction in The North Atlantic Review, Concho River Review, The NWSA Journal, and other journals. She is a Fellow of the Hambidge Center for the Arts and held a residency at the Wurlitzer Foundation of New Mexico. She retired from the Women’s Studies Institute (now the Institute for Women’s, Gender, and Sexuality Studies) at Georgia State University in 2009. She lives in Atlanta with her wife, author and bookseller Libby Ware. Visit her online at her website or Facebook.