In MOXIE, a NYC model with a bad attitude attempts to rebuild her life after a disfiguring attack 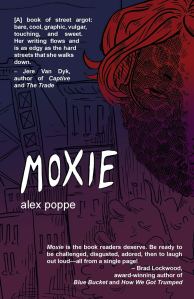 Half of Jax’s face is destroyed. In what she describes as simply “wrong place, wrong time,” she was the victim of a suicide bomber attack at a souk in Marrakesh. That would be a life-changing circumstance for anyone, but Jax’s face is her livelihood: she’s an internationally famous model. Now she’s back in Brooklyn, trying to put herself and her life back together, and doing a bad job of both. Before the attack, she’d led a hedonistic life when she wasn’t in front of the camera. So she’s ill-prepared for the challenges she faces.

Moxie, Alex Poppe’s second book and first novel, follows Jax as she attempts to figure out what to do next. She seems to have few friends, only modeling business acquaintances. Her mother figure is Frieda, a transgender makeup artist who was on the Marrakesh shoot and is the only voice of truth in Jax’s life. Jax spends most of her time drinking heavily – she favors Johnnie Walker Black Label, two at a time – and wandering around New York City.

Early on, Jax adopts a little dog and names her Moxie. But within days, while walking her in Prospect Park, Moxie gets away and Jax has no luck finding her. Jax’s search for Moxie becomes a metaphor for her own attempts to find a way forward into a new life, one that she is unable to envision.

Through her interactions with Lukas (an investigative journalist for The New Yorker), Alat (the Somalian refugee bartender at her favorite haunt), and Marlowe (a precocious pre-teen who might be able to help her recover Moxie), Jax makes her way forward in fits and starts. She is alternately moody and charming, opinionated and profane. In short, she’s an intriguing protagonist whom we root for, even while she frustrates us with her guilt, self-pity, and destructive tendencies.

What really stands out in Moxie is Jax’s voice, which is a rollercoaster that races us along on her journey to possible redemption. There’s a rough, urban poetry in much of Moxie that gives it a NYC model noir feel.

“The heat of the shower intensifies my body’s palette of smells. Suds away the wake of Walker and step into the hug of a towel. In the steamed medicine cabinet mirror, a face stares back at me through the fog of time. It’s the ghost-girl of my first cover–Elle–wide-eyed yet precocious. Lean forward, my limbs lattice-like against the glass, and wipe away the misty filer. Half a face, ravaged beyond repair. The pain feels like hate. Two old-woman eyes regard me. My breath twists.”

Walking through Lower Manhattan, she observes, “Across the street, the sun’s red glare transforms windows into a hundred copper fires.” Later, she describes a winter scene in her Williamsburg neighborhood: “Outside the Bedford Avenue L stop, bikes huddle together, locked under a cover of fat snowflakes. Up and down the avenue, metal store grates get tinseled, contriving a pair of Babylonian gates that stretch to the park.”

Moxie is an indie press book that deserves as much attention as it can get. It’s smart, fierce, funny, and eventually, ever so slightly uplifting. Moxie reminds us that New York City is a tough town and modeling is a tough business, so happy endings are a rare commodity. You take what you find. Or can make.