FRESH WATER FOR FLOWERS a bittersweet, life-affirming story of a cemetery caretaker in rural France 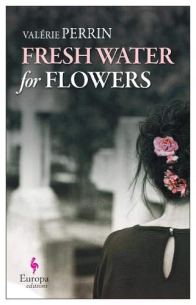 It might seem surprising that a book whose protagonist is a cemetery caretaker would contain everything life offers, but that’s the case with Fresh Water for Flowers, the second novel by French writer Valerie Perrin and the first to be translated into English. On first impression, this 474-page novel appears to be a charming and quirky story with a distinctly French sensibility.

It’s the story of Violette, a former foster youth working as a bartender who is swept off her feet by the older and magnetically appealing Philippe Toussaint. Before long, they are working for the railroad as level-crossing keepers; they live in a small house next to the tracks in rural France and only have to lower the barriers every few hours when a train passes by. Violette does the work while Philippe plays video games or goes on long rides on his motorcycle.

The passion soon drains from their relationship as a result of Philippe’s emotional and physical distance and his compulsive philandering. The birth of their daughter Leonine revives Violette, but Philippe continues to be self-absorbed and hands-off in all things except his girlfriends. But Violette craves stability above all, and the job is easy, pays sufficiently, and provides the predictable rhythm she craves.

Fresh Water for Flowers initially moves back and forth in time among life in the late 1980s and early 1990s at the railroad crossing, the couple’s move to a new job at a small country cemetery in 1997, and the present (2017), as a 50-year-old Violette looks back on her complex and bittersweet life.

The core of the story concerns the shocking events in 1993-1996 that led Violette to the cemetery caretaker position, which she maintains for the next 20 years. Along the way we meet Sasha, the older gentleman who held the caretaker position before Violette and who serves as something of a surrogate father figure; the small group of men who work at the cemetery and often gather in Violette’s small house on the grounds for coffee and the desserts she bakes for them; and Julien Seul, a detective from Marseilles who comes to the cemetery to place his mother’s ashes, befriends Violette, and ends up revealing a mystery concerning a lawyer who is buried there. There is far more to everyone than meets the eye.

The story is heartbreakingly dark in one subplot in which Perrin displays great skill as a writer of mystery and suspense. Another subplot concerns the reasons behind the request of Seul’s mother that her ashes to be placed on the grave of a man Seul has never heard of. Perrin keeps the reader off-balance as she weaves these seemingly unconnected strands together into a life-encompassing whole. And all the while we root for Violette to build the life she deserves and experience the love she has been so long denied.

So this novel mostly set in a cemetery is in fact entirely concerned with life. Yes, there is loss, but there is also love and longing, passion and pain, heartbreak and healing. Fresh Water for Flowers was a completely engrossing reading experience. I feel as though I spent the last 30 years in central and southern France with these characters. And I miss them already. Now I’m just hoping her first novel, Les Oublies du Dimanche (Things We Forget on Sundays), which won several prizes in 2016, will be published in English sometime soon.