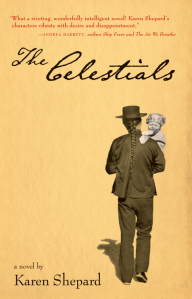 “Hidden gem” is exactly the right term for Karen Shepard’s fourth novel, The Celestials. I’ll admit it first caught my eye for the most superficial of reasons, the title’s similarity to my own name.  But once I’d picked up the book, I was immediately drawn in.

First, the “hidden” part: on the outside, The Celestials is an unassuming little book—the cover a demure tan, with a single black-and-white photo of a Chinese man to one side—put out by a small press, Tin House Books.  It’s based on a long-hidden story from history: in 1870, Calvin Sampson brings seventy-five Chinese workers—the “Celestials” of the title—to his factory in North Adams, Massachusetts.  The problem is, the Chinese workers are unwitting strikebreakers, and their presence stokes tension everywhere: between the laborers and the factory’s management, between the townspeople and the Celestials themselves.  In the novel, things soon reach a breaking point when Sampson’s wife, Julia, gives birth to a half-Chinese child.  Aren’t you intrigued already?

But let’s not forget the “gem” part: Shepard writes in the relatively uncommon omniscient voice, which is no less beautiful here for its authority and simplicity.  Instead, the voice allows her narrative to roam freely between characters, bringing insight into their fears, jealousies, and passions: the town of North Adams has “a peculiarly happy and peaceful look, as if a tea set were balanced in the hollow of God’s large hand; a mother, looking at her infant, feels “suddenly depleted, a wool blanket wet and wrung out.”  The narration is a particularly brilliant decision in the case of Charlie—the foreman of the Chinese workers—and the other Celestials: they may speak only pidgin English, but the omniscient point of view allows them to express their thoughts fluently and eloquently.  It also allows Shepard to weave in historical facts like landscape, giving context to the events in this tiny factory town.

Although she confronts weighty topics of bias, discrimination, and cultural clash, Shepard handles these topics delicately, without ever becoming didactic or moralistic.  Instead, the novel presents a nuanced group portrait of one community—townspeople and Celestials alike—wrestling with questions of identity, otherness, and the possibility of connection.  The portrait is literal as well as literary: photographs of Chinese workers from the era dot the text, challenging the reader to confront these forgotten images of the past. (For more on that, see Shepard’s “Research Notes” at Necessary Fiction).

The overall effect is indeed gemlike, multifaceted and gleaming.  Part historical study, part family story, The Celestials is an examination of love across lines of all kinds—racial, class, family, gender—that deserves a wider audience.