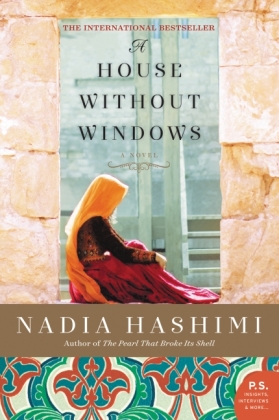 A House Without Windows

In the crowded world of books, it’s easy to miss good writers. I was unfamiliar with Nadia Hashimi when I attended the Literary Women’s Festival of Authors in Long Beach three months ago. But once I read her biography and a synopsis of each of her three books, I knew she was an author I needed to read. Her intelligence, insight, and charm during her presentation only confirmed that.

So I was pleasantly surprised when Jen Forbus and Trish Collins of TLC Blog Tours asked me if I would be interested in reviewing Hashimi’s latest book to coincide with its paperback release.

A House Without Windows is Hashimi’s third novel and, like the first two, is set in Afghanistan, from which her parents immigrated in the early 1970s. It is the story of a devoted wife, Zeba, who discovers her husband, Kamal, brutally murdered with a hatchet to the head in the courtyard of their home. When she is found next to him, covered in blood, her neighbors and even her children believe she killed him, although no one knows why. Hashimi depicts the scene in such a way that it is unclear whether Zeba actually stumbled upon Kamal or murdered him in an impaired state.

She is arrested and taken to Kabul’s women’s prison, Chil Mahtab. Here she awaits trial, sharing a cell with three other prisoners, all of whom have been charged with violations of Afghanistan’s traditional patriarchal culture. Latifa, “a brazen twenty-five-year-old with a deep voice and wide body [who] looked as if she were snarling even when she was at her most cheerful,” had “kidnapped” her fifteen-year-old sister and fled for their protection. Nafisa, “a sharp-tongued woman in her mid-thirties whose defiant manner had won her no mercy from the judge,” has been imprisoned to protect her from an honor killing in retaliation for having an improper relationship with a widower. Mezhgan, “a doe-eyed nineteen-year-old, half the size of her cellmates and nowhere near as bold,” is an unmarried woman who is pregnant, charged with a “love crime.”

A House Without Windows follows Zeba’s journey through the corrupt and byzantine Afghan justice system, moving forward as she meets her idealistic Afghan-born American lawyer, Yusuf, and backward to fill in the story of her life before Kamal’s murder. Zeba has negotiated compromises with herself in order to create a stable home life in a land of constricted opportunities, but she has inherited a stubbornly independent mind from her mother, Gulnaz, known in her village for her powers of jadu, or witchcraft. These two sides of her character are in conflict throughout the story, generating a tense narrative full of complex relationships and plot twists.

The most compelling aspect of the book is the contrast between Zeba and Yusuf, who has returned to the land of his childhood to work for a legal aid group. Zeba understands the many unspoken customs and expectations of an Afghan woman’s life, while Yusuf believes his knowledge of the law and his early life in Afghanistan have prepared him to help her negotiate the legal maze and save her life.

But as we delve deeper into Zeba’s life, we – like Yusuf – find that there is more to her than we first suspected. Hashimi weaves the various strands of the narrative — including the stories of Zeba’s cellmates — with skill and sensitivity, revealing key pieces of information along the way. The result is an absorbing novel that combines a character study, a mystery, and an exploration of an unfamiliar culture. It is an ideal “summer read,” with intriguing characters caught up in a complex plot, set against the backdrop of a fascinating – and often mystifying – land that is unfamiliar to most American readers.

For more on A House Without Windows, visit https://www.harpercollins.com/9780062449689/a-house-without-windows.

You can visit the other stops on the blog tour at these sites:

Tuesday, May 16th: Book by Book

Wednesday, May 17th: A Bookish Affair

Monday, May 22nd: Reading is My Super Power

Tuesday, May 23rd: Girl Who Reads

Wednesday, May 24th: From the TBR Pile

Friday, May 26th: Read Her Like an Open Book

Monday, May 29th: Based on a True Story

Tuesday, May 30th: Cerebral Girl in a Redneck World

Wednesday, May 31st: A Literary Vacation