Jung Yun’s long and unlikely path to publication, from Fargo to NYC and beyond 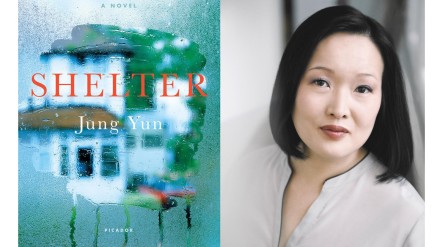 I attended the session with Jung Yun, whose debut novel, Shelter, impressed me (and seemingly everyone else who has read it). Yun’s path to publication is a long and unlikely one. She immigrated to the U.S. from South Korea at age 4, following her father, who came a year earlier to scout out a place in Chicago. Finding it too expensive, he was considering alternatives when someone told him that Fargo, North Dakota was a nice place to live and quite affordable. Yun laughed as she told us, “He visited in the summer!” Her father liked it, despite the fact that there was no Korean-American community there. You can imagine the family’s culture shock when they arrived in November.

Yun was slow to learn English, so she spent a great deal of time watching people, particularly how they addressed each other, an important element of communication in Korean. She began writing early and developed other interests common to the smart, solitary person: reading, painting, and playing music. Her artistic sensibility did not fit her parents’ ideas of what constituted worthwhile activities and career goals. Yun explained, “My parents had left everyone and everything for their children, and my achievements were material evidence of the value of their sacrifice.” The more pragmatic and academically successful she became, the more she lost her artistic interests and activities.

She attended Vassar College and the University of Pennsylvania and before long was working as the assistant to the president at the New York Public Library. Even though her parents would have preferred Yun to study something other than English and to enter a profession, she said, “I knew that it meant the world to my parents to visit me there,” in the iconic building with the statues of lions at the entrance and the impressive Rose Reading Room. Yun was both frustrated and inspired by the sight of writers like Gore Vidal and Francine Prose working in the Reading Room.

Walter Mosley spoke to her one day and when she said she was a writer, too, he immediately asked, “What are you working on?” His interest and acceptance in her as a fellow writer validated her. But when she said she wasn’t writing much because of the demands of her job (including working 15 hours a day), he replied, “Something has to give.” She needed to write. Unhappy with work, she enrolled in a community writing workshop in Tribeca. It was the source the greatest happiness in her life. “I never missed class, no matter how crazy my day was. Sometimes I raced down there for class and then went back to the library to work into the night.”

After the events of 9/11, she decided to leave New York. Within nine months, she quit her job, sold her apartment, got a divorce, and moved to Amherst to earn an MFA in Creative Writing at the University of Massachusetts. It all seemed so drastic that her boss at the NYPL asked her, “Are you OK?” So, in 2002 she found herself living in Amherst with a cow for a neighbor. “That was the first thing I saw every morning.” She found the MFA program “a trying experience, I wanted to quit the entire time.” But she earned her MFA and continued to write while working as an administrator at UMass.

The inspiration for Shelter came in 2004. Her parents were getting older and talking about retirement, something she struggled to grasp, as they were such hard-working people. She knew they were going to need her and her sister more. This change of circumstances inspired scenes and conflicts that eventually led to the novel. But she shelved the idea until 2007, when she read about a violent home invasion in Connecticut, which only the father survived. She followed the case obsessively. In time, she connected one of the early scenes from the book – of the mother wandering around the backyard naked – with this crime. Yun became intrigued by the question of what would happen to a family with a history of violence in their lives.

Yun started writing Shelter in 2010 and finished in 2013. Having turned 40 during its writing and receiving no response from agents, she began to feel discouraged about the likelihood of being published. “But I knew I couldn’t return to life in New York, so I kept writing and revising, trying to turn the character of Kyung [the young husband and father at the center of the novel] into a person.”

Yun concluded the story of her long path to publication by telling the audience, “I was 42 when an agent took Shelter on, 43 when I got a publishing contract [with Picador], and 44 when it was published [last year].”

The PFWA began in 2009 when Pasadena residents Elsie Sadler and Susan Long, inspired the Long Beach Festival of Authors sponsored by the city’s Literary Women group, collaborated with Peggy Buchanan, Executive Director of the Pasadena Senior Center, to host a small gathering of book lovers with six authors, including Gail Tsukuyama and Elizabeth Forsythe Hailey. With a rapidly growing membership, the board formed the Pasadena Literary Alliance, a 501(c)(3) non-profit, in 2015. Proceeds from the event are donated to the Senior Center’s Masters-in-Learning program and Pasadena City College’s Writer-in-Residence program.