Three years and five drafts: Stephanie Gangi on the writing of THE NEXT 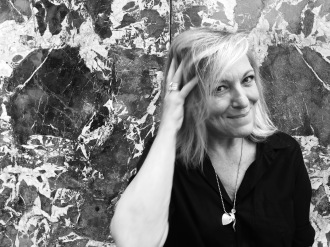 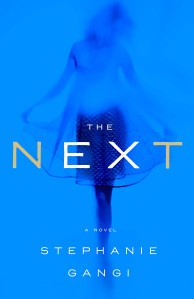 In a recent conversation, this blog’s proprietor, Bill, asked me a question about my debut novel, The Next (St. Martin’s Press): “How do you combine a fast and complicated plot with character study and writing that is ‘literary fiction’?”

That gave me pause. Did I do that?

Don’t get me wrong, I like the question. Because I wanted to write what I love to read, Bill’s classification of The Next as literary fiction is gratifying. To hear from a reader (and Bill is a voracious reader) that my novel delivers a complex story at a good clip about human beings of depth, with lyrical prose … that’s thrilling. That’s what I was going for!

But I have to stop and think. How, exactly, did I make it happen?

Let me count the ways. I bought a dozen craft books. I made an outline, a timeline, noted my key themes, embarked on character studies, defined plot points and subplots, made and hit my word count goals, created a climax and then another climax, and knew the ending in my bones before I even began. I workshopped, I recruited beta readers, I integrated feedback, I wrote and re-wrote my ideal “review” as a kind of mission statement. I had notebooks full of, well, notes, and titles, character names, playlists, chapter descriptions, on and on. I wrote and re-wrote two, three, four drafts.

Two years after I began, I felt finished. I had a draft I was happy with, and serious “interest” from a renowned literary agency. I handed The Next over and waited in a state of high anxiety while four professionals read it. An email was received, a meeting was set, and I turned up nearly giddy with hope. With readers’ reports and notes in hand, the agents said, in the kindest way possible, You’re not there yet. Try again.

Try again. Try again? I’d decimated my social life, neglected my real job, spent money I didn’t have on classes and readers and craft books, forgotten to return calls and pay bills – all to get to this point. I’d given it my all and my best, my very, very “good student” best! I had followed the advice and experience of real writers; I had been committed, meticulous, thorough. I thought I had cracked the novel-writing code, and yet: Try again. Now I was exhausted, sick of the whole enterprise. I sunk into a funk. After weeks of wallowing, I went back to the craft books for wisdom, for encouragement, for a solution. It was unanimous: Step away.

Ever the good student, I set the manuscript aside (literally, as I can write on screen with no problem but cannot for the life of me revise and edit on anything but paper) for three long months. When anyone asked me how it was going, I went stony, I shrugged, I shut down all conversation. (Pro-tip: Tell as few people as possible anything about anything if you are writing your first novel. Resist all urges. Shhh!) I busied myself. I binged on Netflix and endless “Law & Order” reruns. I concentrated at work, I went out with friends, I threw a couple of parties.

One evening, I poured myself a glass of red wine and sat in my favorite blue chair with The New Yorker in hand. I was unable to focus. All I can say is, I was called back. Something compelled me to physically set aside that wine glass and toss the magazine and reach the high shelf where I’d exiled my manuscript.

Okay, I didn’t really set aside the wine. I drank and I read and at some point, I got a pen and I started marking up the pages. A lot of pages. All the pages. The story seemed new to me, and rife with challenges and obstacles, but as those appeared, so did ideas to solve them or navigate around them. For the first time, I grasped the mechanics, the tactics, the behind-the-scenes of my own novel. It was a puzzle! It had taken me four drafts to create all the pieces, and I hadn’t realized there was more to do: fitting them in place.

When I sat back down after the long break, I was a different writer. I ignored outlines and timelines and reports and feedback. I started again. Draft five, page one.

With distance, I’d gained the confidence to rely on my own critical eye and ear. I got out of the way and let my characters live through dialogue and action rather than back story. I read out loud and listened closely for the rhythms of “my style” and then I applied my beat to sections that felt flat or expositional. I didn’t shy away from writing about sentimental things or angry things or pain or grief. I meditated (yep) and tuned in to the way my body responded to what I was writing. When I got teary, or raced along, or felt bored, I realized it was time to ramp up or tone down or create a conflict to maintain my own interest. Many, many times, I closed my eyes and typed like a madwoman, typos be damned. When I’d “come to,” I would be disoriented and shocked at how time had flown. It’s the closest I’ve ever felt to being high while not actually being under any influences.

Here’s Bill’s question again: How do you combine a fast and complicated plot with character study and writing that is “literary fiction” level?

Here’s what I think I did:

Quite simply, I screwed up and tried again. I learned to trust myself. I would not quit. It is only now, in the writing of this piece, that I realize that is exactly what my characters go through, too. That is a major theme of The Next.

STEPHANIE GANGI lives and works in New York City. She was born in Brooklyn, raised on Long Island, attended the State University of New York at Buffalo, and raised her own kids in Tribeca, Rockland County and on the Upper West Side.

Gangi’s first publishing credit, many years ago, was a children’s book, Lumpy: A Baseball Fable, co-written with New York Mets pitching great Tug McGraw. She ghostwrote a tell-all about Liberace in 1984 but left the only copy in a taxicab. She has written jacket copy, pitch letters, business plans, speeches, mortgage checks, absence excuse notes, letters to editors, hundreds of poems, dozens of story starts, dating profiles, countless emails, texts, sexts, and random tweets. She once chalked a love note on the wall of a Paris alley in the rain.

Her poem, “Four,” was a 2014 award winner and appears in the anthology for The Hippocrates Society of Poetry and Medicine. The poem “Talking to My Dead Mother About Dogs” appeared in the Fall 2015 issue of the New Ohio Review.

The Next is her debut. She is working on her second novel.