Chaos Outside the Study Door: Virginia Pye on Balance in Writing and Life 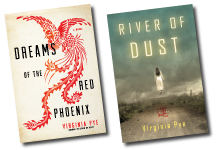 Last night, at a bookstore reading in Boston to celebrate the launch of her second novel, the author mentioned the “mental multitasking” required of women writers. We must live double lives, she said, or even triple, I’d suggest, as we juggle writing, paid work, and often, family.

The day before, an aspiring writer and friend sat on my back patio and lamented how she can’t make time to write during the academic year. Her job as an elementary school librarian and her community involvement are so time consuming, though also greatly rewarding, that there’s nothing left in her mind late at night or early in the morning when she finally pushes aside the tasks of the day and sits down to write.

Another friend, a best-selling author with three young children, recently texted me: “I’ve not been working, in any real way, for something like two months. And I feel almost panicky about returning to my manuscript.” That she is highly successful and widely respected seems only to ratchet up her anxiety, not calm it.

Frantic, worn out, and living multiple lives, the woman authors of probably every book that Bill Wolfe so skillfully reviews on this blog writes with chaos just outside their study door. Male authors no doubt face similar, difficult pressures as those experienced by women, and of course each artist’s challenges are unique, but for the purposes of this blog that focuses solely on women writers, I’m interested in sharing my own experience and that of other women I know who have pursued writing through various stages of life. They may not have recently made a big transition in their lives, as I have by moving to a new city, but with children careening about, or paid work to complete, not to mention spouses or partners who require a certain amount of attention, we women writers must struggle to block out the noise of our lives.

In her journal, Virginia Woolf wrote, “My mind is churned and frothed. And to write I must be a clear vessel.” If anything, achieving this ideal state of mind has become even more elusive for women writers. To succeed at putting meaningful words on the page, the woman writers I know juggle complex schedules, financial pressures, and the needs of loved ones in order to find the clarity Virginia Woolf described.

Before I had children, it was easier for me to create the ideal conditions for writing. I taught writing at a university and tutored at a high school, but I still managed to write daily. When my first novel didn’t sell, I pressed on and wrote another one. I had a strong second draft under my belt when I gave birth to my first child. The delivery was complicated and left me exhausted and debilitated for months. The experience of having almost not survived made me all the more grateful to be a mother.

In the first months, my attention was focused on recovering and and enjoying my daughter. The thought of writing hardly occurred to me. I remember my husband setting up the changing table on what had been my writing desk. The irony of that choice wasn’t lost on me, but it didn’t matter: I had no regrets about putting writing aside. And in the following years, I continued to prioritize being a mother over being a writer of long form fiction.

But eventually the urge to write began to return. I first found myself penning poems, mostly about motherhood, but also about nature and gratitude for life. Eventually, these became prose poems. Then they became short essays on mothering. Then finally, I wrote short stories in which I created fictional characters and worlds, my imagination reignited and engaged once again.

By then, my son, born three and a half years after my daughter, was ready for preschool. I had spent almost eight years being a full time mother. Although not every moment was idyllic or easy, I loved those years with my children. But as I returned to writing, I was now ten years older and with no published novel to my name. I felt greater internal pressure to write than when I’d been an aspiring writer in my late twenties and thirties and had all the time in the world. As a result, I dove back into the practice of novel writing each day when the children were off at school. I returned to my craft with a vengeance.

I remember feeling keenly aware that some of my peers had continued to write published novels while having children. That hurt my ego and made me ache for the legitimacy that being published bestows. But in looking back, I can see that I couldn’t have done it any other way. I needed to recover from childbirth then commit myself fully to being a mother, building up my reserves in order to raise my family, and perhaps also in order to have the mindset to eventually return to novel writing. Now, as a recent empty nester, I relish my uninterrupted days. At the same time, I miss the clamber and vitality that I had grown used to in our home.

Today, I see more women writers who are young mothers and who also somehow manage to publish highly accomplished work at the same time. I envy their sense of purpose and success, though I know it can’t possibly be easy.  The pressures on these women are enormous, but they still manage to maintain their imaginations and inner lives. Pursuing their work, even in brief, free moments, helps these admirable women maintain a sense of themselves when they might otherwise feel like they’re drowning in the monotony and challenges of motherhood. I remember that feeling and how hard it was to strike a balance.

The world continually distracts us from our work at the same time that it nags us to be successful. We feel we should be at peek productivity all the time, in every season of our lives. But for many of us, that isn’t possible. We need the fallow periods as well as the ones in which we write with sharp focus. Both of my published novels were written fluidly and with a clear sense of purpose, but I have a half dozen other unpublished ones, including the one I’m working on now, that took years to write. Each book has its own rhythms, its own demands on our imaginations and lives. If everyday living swamps us, then I think it’s helpful to accept that fact, until, once again, the balance shifts and we reach a place where writing can become a top priority.

On Facebook and Twitter, every other friend seems to be publishing a new book every other week. I’ve recently seen posts by women writers who have dashed out final scenes before going into labor, or written right through chemo treatments, or while dealing with the death of a parent. If true, those are remarkable achievements. But I’ve also seen mention recently in reviews and interviews that some authors have “lost” whole years to travel, or childrearing, or in the case of a recent young man who was compared to Dickens, to years of playing video games. While I don’t recommend that distraction, who can say what feeds the mind of the writer?

We need to have faith that our skills as writers will still be there when the time is right for us to create. My best-selling author friend and my school librarian friend will each get back to their writing when the time is right, and perhaps because their lives are so full right now, they’ll return to it with a new and more enlightened mind. The increased wisdom and empathy that we gain from living our lives well is surely reflected in our writing.

Virginia Pye’s second novel, Dreams of the Red Phoenix, was chosen as a Best Book of 2015 by the Richmond Times Dispatch and was called “riveting” by Library Journal. Gish Jen wrote, “Gripping, convincing, and heartbreaking, Dreams of the Red Phoenix is a real page-turner and thought-provoker—wonderful.” Virginia’s debut novel, River of Dust, was an Indie Next Pick and a Finalist for the 2013 Virginia Literary Award in Fiction. Caroline See in The Washington Post called it “intricate and fascinating,” and Annie Dillard described it as, “A strong, beautiful, deep book.” Her award-winning short stories and essays have appeared in The New York Times Opinionator, Literary Hub, Huffington Post, The Rumpus, The Tampa Review, The Baltimore Review, and elsewhere. Please visit her at www.virginiapye.com.