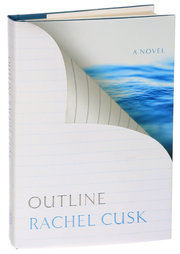 Rachel Cusk, where have you been all my life?

Admittedly, that’s a ridiculous question because she’s been on the planet a few years longer than I have and has nine or ten well-regarded books to her name, some of them winners of or finalists for prestigious prizes.  If I’d been paying closer attention, reading more reviews or browsing more adventurously in bookstores, I would have known to pick up one of her novels or memoirs before last winter.

It was after looking over the New York Times Book Review’s list of the 2015 ten best books of the year list that I bought a copy of Rachel Cusk’s most recent book, Outline.  I read it in two days, but many readers might finish it in a few hours; I had to resist the urge to read it quickly, and I kept thinking that here was a book I’d have to assign to one of my writing classes, even if assigning a cherished book often ends in disappointment—the response from students is rarely what I’m hoping for.  Reading might be a solitary activity, but it is lodged so firmly in community—both the real and the imagined.   When I read a book I love, I want everyone I know to read it and love it too.

Cusk’s ability to establish an almost hypnotic intimacy with the reader was one quality that immediately drew me into Outline, as was the voice of the first-person narrator, which manages, somehow, to seem both detached and confiding.  Outline is also often very funny; the humor that characterizes many of the observations and exchanges throughout the book is skillfully deadpan.

The main character, an Englishwoman who travels to Athens to teach a summer writing workshop, has recently gone through a divorce and is the mother of two small children who are back at home in England. Their pull—both the children’s and the divorce’s—on the narrator’s consciousness is one of the many undercurrents that heighten the book’s feeling of suspense and immediacy, though Outline is not a thriller in any traditional sense.

As the many incandescent review excerpts featured on the dust jacket of the FSG hardcover edition of Outline attest, it is a book that defies categorization.  As Julie Myerson stated in her review for The Observer, “This has to be one of the oddest, most breathtakingly original and unsettling books I’ve read in a long time…Outline is a triumph of attitude and daring, a masterclass in tone.”

The novel is organized into ten chapters, each featuring an extended conversation between the narrator and another character, sometimes more than one.  Characters are often in transit—on a plane, in a speedboat, on foot, and the book’s own narrative momentum is, in a sense, mirrored by the characters’.

As I read Outline, W.G. Sebald’s novels frequently came to mind—also difficult to categorize (due most especially to their merging of historical fact, autobiography, and fiction).  Austerlitz and The Emigrants in particular were in my thoughts, but all of Sebald’s books feature journeys of some kind.  Other similarities between Outline and Sebald’s work that I noted were the restlessness and enquiring tone of the often-displaced narrators, the melancholy, despite the subtle flashes of humor, and the ghostly, just-off-stage presence of the author.

After finishing Outline, I read Cusk’s 2012 memoir about her divorce, Aftermath, which I’d heard from a friend was the subject of some controversy upon its publication—Cusk was excoriated by critics for invading her family’s privacy (she and her ex-husband have two young daughters) and predictably, for narcissism.  Despite knowing from Outline that Cusk writes with restraint and wasn’t likely to resort to melodrama, I was curious to see if Aftermath would deliver any incendiary or salacious details about the author’s divorce.

I’ll put it this way, if I’d been assigned to review Aftermath, my one complaint would have been about the very restraint I so admire in her writing.  By the end, I wasn’t sure why Cusk and her husband decided to divorce, except for what in a general way must account for most, if not all, divorces: as with any of our most intimate and formative relationships, outside forces inevitably arrive and exert hostile pressure, and eventually, it changes us, along with the terms of our relationships, despite any attempts we might make to protect them.