Lost and Found: A Conversation with Janina Matthewson about OF THINGS GONE ASTRAY 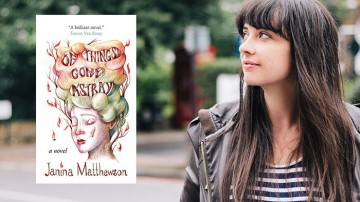 One of the most gratifying aspects of being a passionate reader (and a blogger) is when a book arrives with no fanfare and proceeds to utterly captivate you and carve out a special place for itself among your favorite books. Such is the case with Janina Matthewson’s wonderfully surreal and bittersweet debut novel, Of Things Gone Astray, which was published by The Friday Project (HarperCollins) in the UK in August 2014 and in the U.S. this past January. Novelist Simon Van Booy liked it, too. “Of Things Gone Astray is a brilliant novel that redefines the boundaries of where our lives begin and where they end.” [You can read my review of February 18, 2015 here.]

Matthewson has quite a varied background for someone so young. She studied theater, English, history, and linguistics and trained as an actress; she published a novella, The Understanding of Women, in October 2012; and her play, Human and If, had its first reading in July 2012. Originally from Christchurch, New Zealand, she has been living and working in London for the past few years (and trying to get used to being cold at Christmas). She was kind enough to speak to me about her novel over Easter weekend.

What inspired you to write about people who discover “things gone astray” in their world?

I initially was going to write about people who had something taken away, but that disappeared when I was brainstorming the characters. I don’t know specifically what inspired it, but I did start working on it about a year after I moved to London so it’s possible loss was just on my mind.

What informed your decision regarding how many characters (and narratives) to use? Were you ever concerned that there might be too many, that the plot might become confusing?

I think I just brainstormed characters. Actually, I thought more about things you could lose – until the list felt complete. I didn’t have  a set number in mind, and when I had the six, they stayed. I guess I always assumed that if I could keep track of them all while I was writing — given how messy that process was — it wouldn’t be too complicated for the reader. And I think if it had been, that would have been one of my first notes from my editor.

Was it always your plan to use a third-person narrative, or did you consider/try first-person point of view? Third-person has obvious advantages in a novel of this type, but I think it would be interesting to read each character’s internal monologue, too.

I’m not a huge fan of first person, to be honest. There’s too much temptation to explain every feeling the characters are having, and I like leaving things open to interpretation. I’d only ever use it if it was to serve a real purpose — for example, in Gone Girl, which I loved, it’s really important that the reader doesn’t trust what they’re being told, and first person narration is a great way to do that, because ever word is written with an agenda. Or The Murder of Roger Ackroyd, which is one of the greatest detective novels ever written, because of its use of it. When it’s not used to that kind of effect, it always makes me feel like I’m being pushed too hard to care about the protagonist.

Do you view one character and his/her story as the central strand of the plot?

I guess Jake is for me, because he serves as a contrast. Because he thinks he has nothing left to lose, and is the one who actually stands to lose the most.

How did your background in theater come into play when writing the book? Did you conceive of the story as a play and then decide it was better suited to a novel, or was the novel form always the plan? Are there any plans to adapt Of Things Gone Astray for stage or screen? I could see it working beautifully in both forms.

This was always a novel. I write scripts too, but I find that some stories just naturally fit into a certain medium, and when I try to write them outside it, they don’t work. I think having a background in theatre makes me more inclined to think about characters — I’m used to analysing character motivations. There aren’t any plans for an adaptation but I would love to see how someone would do that.

How long did you work on the book? What was your writing process? (Was it a structured, daily task as part of a workaday life, or did you write it in an intense period of activity, or something else entirely?)

It took around a year and a half in total, I think, and I had to work it around a rather chaotic working life, part of which was working at the Edinburgh Fringe Festival, sometimes until 3 in the morning.

How much of the novel was outlined or otherwise planned, and how much came about as you wrote it? Did you have all the characters’ eventual connections plotted out before you began writing or did they grow toward each other organically?

I had ideas of structure, many of which changed as I wrote. I always knew they would cross paths. Some of them took a few tries to get right.

I was especially intrigued by the story of Cassie refusing to leave the Arrivals terminal and eventually putting down roots there. Can you explain the genesis of Cassie’s story?

I was actually waiting for a friend at the airport — I was early, because I panic about that sort of thing. It’s a pretty prosaic genesis really!

I also liked the use of two types of narrative you utilized for young Jake’s story. The flashbacks to the earthquake in New Zealand are in present tense, which provides immediacy, and in a narrowly focused third-person, which makes his experiences all the more sympathetic. And in his sections the text itself is right-justified, so it is physically off-kilter on the page. Can you talk about these interesting authorial decisions?

They were both there right from the beginning — actually in the very beginning Cassie was present tense as well. But I always knew I had to have some way of distinguishing the memories from life, and I was lucky enough to stumble upon an effective way early on.

Of Things Gone Astray is both haunting (from the characters’ palpable sense of loss and confusion) and hopeful (as they find their sense of direction, encounter others who provide a new perspective/coping strategy, and move through the grieving process). That seems like the book’s greatest accomplishment. How did you manage to strike that delicate balance? I could easily see the story itself going astray.

That is such a lovely thing to hear and, to be honest, I don’t have an answer. In the end you just have to trust your instincts — and the instincts of your editor — and hope that it strikes the right chord in the reader. I have quite a low tolerance for mawkishness and sentimentality, so I guess that probably helps me balance out the loss with things that are a bit more light-hearted.

As a New Zealander living in London, do you get homesick? Or are there so many fellow Kiwis there that it eliminates much of one’s desire to get on a plane and fly halfway around the world to get home? What do you miss about New Zealand?

I get frustrated that I can’t see people whenever I want. When someone I love does something exciting and I can’t just go over and celebrate with them. I don’t see a huge amount of Kiwis in London really — just a couple of friends who’ve also moved over — but I kind of like that. Because what’s the point of moving so far just to be surrounded by people from home? I do miss being near the sea, and I miss living somewhere where it’s not stressful to just leave your house. London takes a lot of energy — I think I’m more relaxed in New Zealand. So I miss that.