THE UNAMERICANS: Molly Antopol’s debut collection is my choice for the National Book Award 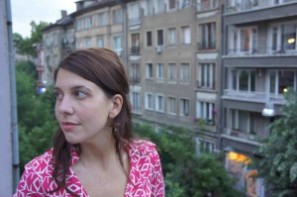 In recognition of Molly Antopol being named to the longlist for the National Book Award for Fiction, I am re-running my review of The UnAmericans, originally posted on Feb. 8, 2014.

It has become increasingly common for reviewers and lovers of short stories to compare an exceptional story writer’s work to that of Alice Munro, the short story master who won the 2013 Nobel Prize for Literature (just as Munro was often compared to Chekhov). Often the comparison is unwarranted, either because of differences in style or subject matter or, frankly, because few writers are in Munro’s class.

But if any writer’s work justifies comparisons to Munro, it is Molly Antopol, whose debut collection, The UnAmericans, was published on February 4 by Norton. Each of the eight stories is a powerful, novelistic work that manages to encompass a character’s entire life through the use of representative experiences and telling details — as is the case with Munro’s work. Though the stories vary widely in terms of characters and settings, they share the ability to pull the reader in like a riptide and carry you away before you realize it. As I read The UnAmericans, it soon became clear why Antopol was selected by the National Book Foundation as a “5 Under 35 Author” last November (along with well-regarded young writers Amanda Coplin and NoViolet Bulawayo, among others).

The title of the book refers to the fact that the characters in Antopol’s stories are Communists from the first half of the 20th century, dissidents from Russia or Eastern Europe, or non-Americans like the Israeli characters in “A Difficult Phase” and the heartbreaking closing story, “Retrospective.” More broadly, it refers to people who are, in fact, Americans, but are viewed as “un-American” in their beliefs, behavior, or sub-culture by the mainstream culture.

Her stories display an impressive insight into the psyches of the various damaged characters, all of whom are trying to find their place in their own family, culture, or time. The stories take place against a backdrop of significant events, whether World War II, the Communist witch hunt of the 1950s, the Israeli occupation of the West Bank, or the tectonic social and economic shifts in the former Communist bloc countries.

Each story pulled me in almost immediately and held me in thrall to the last word. I was intrigued by the characters, settings, and conflicts and wanted to know how these people would find their way to some kind of contentment. Her narrative control never faltered; despite this being her first collection of stories, I felt I was in the hands of a master. I am particularly allergic to clunky sentences, cliched imagery, and wooden dialogue. I did not find a single example of any of these common writing afflictions. These rare traits are what reminded me of the stories of Alice Munro: complete control, flawless writing, and realistic characters fighting for their emotional or psychological lives.

In “The Old World,” divorced dry cleaner Howard Siegel falls for a slightly younger and very voluptuous Ukrainian immigrant named Sveta, to the consternation of his daughter and her husband, who have recently become Orthodox Jews. Sveta is, in part, impressed by the fact that Howard’s “people” also came from Kiev. “Our people?” he thinks. “My people were from Ditmas Avenue. My people had left Ukraine before the Cossacks could impregnate their wives.” His relationship with Sveta leads them back to Kiev, where events take a surprising turn. But Howard discovers something he wasn’t expecting or even interested in, and a glimmer of hope prevails.

Another of my favorites, “Minor Heroics,” concerns two Israeli brothers who live with their mother on a moshav, a cooperative agricultural community similar to a kibbutz. The older brother, Asaaf, has just been discharged from the Israel Defense Forces after being stationed in Hebron. The younger brother, Oren, is a driver in the IDF, which he admits is “perhaps the least essential job in the Israel Defense Forces.” An accident on the farm changes the lives of the family and Asaaf’s relationship with his girlfriend, Yael. Oren has always played second fiddle to the charismatic Asaaf, but the accident shifts the ground beneath their feet, and the story depicts the characters’ efforts to find solid ground again. As in “The Old World” and life in general, things do not turn out quite as anyone had planned. Antopol’s sympathetic understanding of these two very different young men and their sibling rivalry produces a narrative tension in which we hope things will turn out well, yet fear (and suspect) they will not.

“The Quietest Man” tells of a father who is preoccupied by his daughter’s sale of her play, which he believes portrays him in an unflattering light. How can he persuade her to rewrite the character? Is he just paranoid? Neurotic? Antopol uses this fraught circumstance to examine the father-daughter relationship, in which both operate under misconceptions about the other’s character. Again, the protagonist discovers that all is not as it seems; life and the people in it are not so predictable after all. How often we fail to understand even those to whom we are closest.

“Duck and Cover,” set during the years of the Eisenhower administration, follows the coming of age of a young girl who has grown up in a family of Communist Party members in Los Angeles. Her father is an active member and all their family friends are members of “the Party.” This milieu is simply the air she breathes, and she has never questioned it — until now.

“And then the question that’s been knocking around inside me for years comes tumbling out: ‘Do you ever think it isn’t worth it?’

“We’ve been talking so openly, but suddenly even saying the question feels too risky, as if someone might really be listening. ‘You know,’ I say. ‘Have you ever thought, for just a second, of giving all this up and being — like everybody else?’

“‘We are like everybody else,’ my father says quickly. ‘Everyone who matters.’”

“For a moment he doesn’t say anything. ‘You have to understand,’ he says. ‘The Party was our life, your mother’s and mine. And after she died, the idea of getting out of bed and making coffee and going on with my day seemed … impossible. But everyone, they stepped in. The Party women caring for you, Lou and Alan coming by every single day, taking you to school, to the park on weekends. Everybody, all of them, they helped you with your homework, they taught you to read. I couldn’t do any of that myself.’ He takes a slow sip of beer. ‘You can’t question the Party,’ he says. ‘The moment you do — you fall apart.’”

“… All at once I feel his pain, his life, lean against my heart.”

“A Difficult Phase” follows a young Israeli journalist, Talia, who is looking for work after having returned from a job in Kiev, but instead finds herself in a relationship with an older widower with a sullen teenage daughter. On their first date, Tomer opens up too soon and with too much intensity, revealing, among other things, that he is in therapy and that his daughter, Gali, was going through a “‘very understandably difficult phase.’”

“She realized she was enjoying herself. That she hadn’t, if she was going to be completely honest, had such a good time in months. Getting Tomer to sidestep the terrible first-date small talk and move straight to the core of things was making Talia feel, for the first time since she’d lost her job, like a journalist.”

“‘I’m sorry,’ Tomer said, reaching for the check. ‘You’re the first person I’ve been to dinner with and I probably shouldn’t be let out of the house.’”

“And though Talia knew he was right, and though she knew there probably wasn’t a man less ready to date in all of Tel Aviv, possibly the entire Middle East, somehow that was making him all the more appealing.”

This is what I love about Antopol’s writing: her characters are real people, experiencing life the way it actually happens, full of unexpected turns in the road that take you places you never thought of going, but at which you find yourself glad to have arrived. Gali is not the only character going through “a difficult phase.” So are Talia and Tomer, so are we all, and the phase may be one’s entire life, which is often difficult.

I was so impressed by The UnAmericans that I read it twice, something I almost never do. I have no doubt it will be at the top of my list of the Best Books of 2014 in December. If you like short stories at all, I exhort you to read this book. Molly Antopol may be new to you and me, but she worked on these stories for 10 years while completing her MFA at Columbia University, serving as a Wallace Stegner Fellow at Stanford, and teaching creative writing in Stanford’s English department. In her first collection, she is already a writer to be reckoned with.