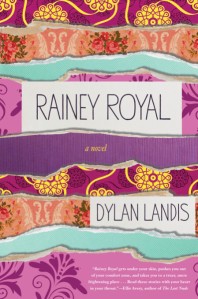 Dylan Landis’s debut story collection, Normal People Don’t Live Like This (2009), featured a range of memorable characters, one of whom returns as the titular protagonist of her first novel, Rainey Royal.

While she was a minor character in the first book, Rainey gets her moment in the spotlight in this raw and prickly coming of age story set in 1970s Greenwich Village. In these 14 interconnected stories, Rainey is the 14-year-old daughter of legendary jazz musician Howard Royal, whose rundown five-story brownstone serves as something of a commune for him and his musical acolytes and groupies.

Howard’s parenting style can best be described as benign neglect, sprinkled with occasional philosophical advice. Howard’s sidekick, Gordy, lives on the same floor of the house as Rainey and visits her most nights to talk and engage in a variety of inappropriate, if not quite criminal, behavior that Howard excuses in his distinctive (and infuriating) hippie-beatnik blame-the-victim manner. Rainey’s mother is of no help because she’s bailed out to live on an ashram in California.

As a result, Rainey is a damaged but daunting young woman. On one hand, she displays a level of independence that is impressive even for a child raised in Manhattan. On the other, she is a borderline sociopath who manipulates her friends and uses her intelligence, charisma, and precocious physical attributes to unsettle her teachers and other adults.

In “Rapture and the Fiercest Love,” Rainey has to serve detention with her English teacher, Mr. Moreno. He wants her to revise her essay.

“‘I don’t remember what I wrote,’ says Rainey, and rises from her chair. ‘I have to see.’

‘Stay right there,’ says Mr. Moreno. His voice is a closed door.

‘I just need to see,’ she says in her little-girl voice. She plants her palms on the front of his desk and leans forward. And then Mr. Moreno says something that doesn’t make sense.

‘I’m bulletproof, Rainey.’ He looks directly into her eyes. ‘Are you?’”

In “Trust,” Rainey and her friend Tina follow a couple as they walk home, at first “playing” with the idea that they will rob them. Except Rainey has taken Howard’s gun and the girls force the couple into their apartment, where Rainey and Tina verbally and psychologically abuse and rob them, all the while engaged in the type of internecine argument at which young women excel.

The stories follow Rainey as she struggles to gain control over outside circumstances and events – which range from amusing to appalling — and her inner conflicts. Frequent visits to museums to view and sketch the works of the masters help steady her progress toward sanity, adulthood, and her dream of a life as an artist. By the time she reaches her early 20’s at the end of the book, there is hope for her despite having raised herself in a world with little stability, much abuse, and no real love.

While Rainey Royal really is a story collection rather than a unified novel, and it strays from its strengths a bit toward the end, these are minor flaws in an otherwise unsparingly honest collection.

Dylan Landis has created a remarkable, if difficult, character. Landis’s lean, muscular prose is perfectly suited to the characters and events. She never flinches and never looks away from her young protagonist’s troubled life, as she is at first tortured and later saved by art and artists. It’s a rough ride, not for the faint of heart, but ultimately a rewarding one.