YOU ARE ONE OF THEM probes friendship, a disappearance and U.S.-Soviet politics 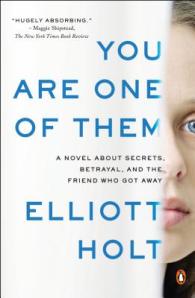 You Are One of Them

Elliott Holt has pulled off a clever hat trick of a novel with You Are One of Them. First, it’s the story of a friendship between two young girls coming of age. Second, it’s a time capsule that contains the mid-80s sociopolitical tension between the U.S. and the U.S.S.R. And third, it’s a literary thriller with a missing persons case at its center.  And through it all, Holt’s writing is nearly flawless. She delicately opens up the heart of a close friendship between 10-year-olds Sarah Zuckerman, the narrator, and Jenny Jones, while powerfully recreating the mood in the last years of the Cold War, when strong rhetoric from President Reagan had many Americans fearing the nuclear end was near. (Remember Jonathan Schell’s The Fate of the Earth?) Holt has taken the life of 13-year-old Samantha Smith as an inspiration for the novel’s premise, but that is just the starting point for a rich, textured, and compelling story that poses provocative and intriguing questions.

Despite living in a Washington, D.C. neighborhood, Sarah and Jenny live a more or less typical suburban life. Sarah’s mother is an anxious agoraphobic and her British father has returned to England, where he has remarried and evidently forgotten his former wife and his daughter in America. Jenny’s parents seem perfect to Sarah; her father works as a consultant to the U.S. government and her mom orders items from catalogs, volunteers in the community, and manages a picture perfect household.

“Jenny and I were best friends. That title mattered then. We didn’t throw the term ‘best’ around lightly. You had to earn it. I’d never had a best friend, but I didn’t tell Jenny that. I didn’t tell her that until she came along I’d never felt like I belonged anywhere…Our bedrooms faced each other across the street. The houses were too far apart for us to actually see into each other’s rooms, but at bedtime we exchanged good-nights, flicking our flashlights on and off three times: blink, blink, blink.”

One rainy day, the two bored girls are stuck in Jenny’s house. Sarah, whose mother is a zealous anti-nuclear activist who has indoctrinated her young daughter, decides to write a letter to Soviet president Yuri Andropov, asking him to take steps to prevent nuclear war for the sake of the American and Soviet children, who really couldn’t be all that different, could they? She thinks Andropov might listen to a normal American child. Jenny is excited by the idea and joins Sarah in writing a heartfelt missive to the leader of the “Evil Empire.” Mr. Jones promises to address and mail the letters for the girls.

Oddly enough, Andropov replies to Jenny but not to Sarah, who is initially mystified. But then she figures out that he chose Jenny because her name is so quintessentially American (perhaps he is anti-Semitic and disliked the name Zuckerman, although Sarah is not Jewish). Sarah is acutely aware of the fact that Jenny is exceptionally pretty, charming, and popular and is part of a perfect American family. She, on the other hand, is average-looking (perhaps even slightly homely), shy and bookish, and comes from a broken home with a mentally ill mother.

Andropov’s very public reply includes an invitation for Jenny and her parents to visit the Soviet Union as his personal guests. They will visit the key historic and cultural sites and spend time with Soviet schoolchildren. The story, and Jenny, become a media sensation, and before long the Jones family is on their way to the U.S.S.R., where Jenny is assigned a “minder” by the name of Svetlana, a “typical” Soviet girl who will be her friend while there. Looking back many years later as she narrates the story, Sarah realizes that, of course, it was all a Soviet propaganda ploy with children as the pawns in an adult game of chess.

Sarah tries not to resent Jenny but can’t help herself. They maintain their friendship upon Jenny’s return from the Soviet Union, but something has changed. Maybe it’s the fact that Jenny is inundated with fan letters from around the world or that strangers ask for her autograph, or that Jenny hasn’t said much of anything about the fact that the letter writing was Sarah’s idea. As they enter sixth grade, they grow apart. Jenny is now in demand by the most popular girls and begins to spend more time with another girl. Holt explores the social dynamics of life among sixth graders with insight and sensitivity. Clearly, she remembers it well.

In 1985 the Jones family dies in a small plane crash while flying to Maine to make an appearance. Life goes on for Sarah, who with her mother’s help, creates a foundation in Jenny’s name to promote U.S.-Soviet relations and exchanges among children.

The plot thickens when, in 1995, Sarah receives an email from Svetlana, the Soviet girl who accompanied Jenny during her 1985 trip. Svetlana encourages Sarah to visit her in Moscow and hints that there is more to Jenny’s life and death than Sarah knows or can imagine. As she is just graduating college, Sarah decides that living in Moscow for a year is an experience she can’t pass up. She heads off to the newly democratized Russia to meet Svetlana and investigate her intriguing suggestions that Jenny’s death may have been a hoax.

Sarah captures the zeitgeist of the early-to-mid 1990s perfectly. “We often telephoned each other to verify that e-mail had arrived. Cyberspace was so mysterious. This was pre-Google, so we weren’t yet relying on the Internet to answer our every question; in fact, we weren’t consciously using the Internet at all, just our various college e-mail servers. I had never heard the term ‘Web site,’ let alone seen one. One of my friends tried to tell me about the seemingly mythical ‘Internet,’ and I nodded indulgently, certain it was something  that would only capture the imagination of Dungeons and Dragons enthusiasts.”

The second half of the book describes Sarah’s often surreal Alice in Wonderland experiences in mid-90s Moscow. Svetlana strings her along, providing tasty tidbits of information but concealing as much as she appears to reveal about Jenny and her family. Sarah learns to be patient and bide her time, while digging for information when and where she can. Is it possible that Jenny defected and is living in Moscow? Why would her family have done that? How could it have remained hidden? If it’s true, why is Svetlana revealing this fact to Sarah? And why now? Or is the hoax being perpetrated by Svetlana? What could she be after?

At one point, a frustrated Sarah complains to Svetlana, “You said I should come to Moscow to learn the truth.”

“‘Ah, truth. You Americans love truth.’ She leaned back in her chair and cracked her neck. ‘I think it is the favorite word — after freedom, of course. You want the truth, and you ask for it like the eggs you order for breakfast. Today I want my truth sunny side up! And tomorrow hard-boiled. And then sometimes it is scrambled. And you congratulate yourself for ordering this truth, because you think asking for it is what matters. But what is truth? Pravda? No, Pravda is a newspaper. We understand there is not one truth. There is your truth and my truth and yes, your Jennifer Jones’s truth.’”

Elliott Holt’s compelling debut novel explores the many forms of truth and comes to some surprising conclusions. You will walk away from this book to find that Sarah and Jenny still haunt you, talking to each other and to you. Lauren Groff, author of Arcadia, captures the essence of the novel in her blurb on the flyleaf: “The great accomplishment in You Are One of Them is how effortlessly the vast and global mixes with — and informs — the deeply felt story of a lost friendship. Elliott Holt is graceful, sharp, and super-smart, and her novel is a bildungsroman for the atomic age.”