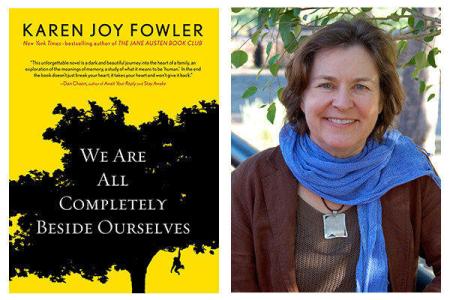 Karen Joy Fowler has made it to the Booker Prize shortlist with her brilliant 2013 novel, We Are All Completely Beside Ourselves. What makes her nomination even more notable is that this is the first year American writers were eligible for the prestigious award, which was previously open only to UK and Commonwealth writers. American Joshua Ferris also made the shortlist of six novels with his third novel, To Rise Again at a Decent Hour.

The other finalists are Richard Flanagan (Australia) for The Narrow Road to the Deep North (which I highly recommend, along with all of his previous novels), Neel Mukherjee (India/UK) for The Lives of Others, Howard Jacobson (England) for J, and Ali Smith (Scotland) for How to Be Both. Jacobson won the Booker Prize in 2010 for The Finkler Question.

Fowler received the 2014 PEN/Faulkner Award for her novel last April.

In honor of Fowler’s nomination, I’ve reposted my review of We Are All Completely Beside Ourselves, originally posted on April 13, 2014.