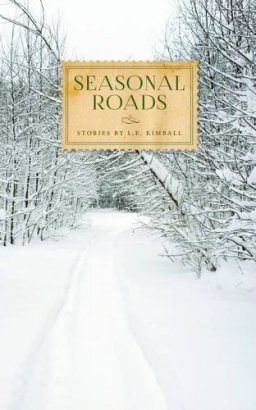 Seasonal Roads is L.E. Kimball’s impressive new book of stories. The title refers to roads that are unplowed and therefore unpassable in winter. Kimball guides you down some of these roads in Michigan’s Upper Peninsula – into cabins, forests, and rivers, and into the lives of three women.

I fell in love with these three female characters. In the opening scene, Aissa is steeling herself with alcohol in order to shoot her dead mother’s sick dog. Watching Aissa take aim is her daughter, Jane, ten years old and delicate-seeming but actually clear-eyed and tough. When Aissa’s first shot hits the dog, but misses its heart, Jane tells her mother, “Shoot her again, Mom.”

And then there is Norna, Aissa’s mother and Jane’s grandmother. She’s perhaps the most rugged of these women. Although Norna loves the kind couple who found her in a dump as a baby and brought her home, she is tied more closely to the sun, moon, earth, and rain, which served as her first parents when she lay abandoned on the ground.

This is Hemingway country, inhabited by women. Norna’s cabin is on the river Hemingway reinvents as the “the Big Two-hearted” in his fiction, but which Kimball and her characters call by its true name, The Little Two-hearted River. As the disparity in these names implies, Kimball’s women are as courageous and conflicted as Hemingway’s men. But the women’s bravery involves less braggadocio.

These women hunt, trap, and fish as skillfully as men. They cook trout and venison, rabbit and grouse. They sleep in wigwams and cabins and cheap motels. These women make love on air mattresses and hard beds … on sand, dirt, and rocks. And they challenge and bedevil the men in their lives. In “Deadfall,” Norna ties up Sam, her Indian lover, because she suspects he has a twin and they are taking turns with her. In the collection’s title story, while Aissa is gathering her courage to shoot her mother’s dog, she holds sips of beer in her mouth, hoping to rot her teeth and thereby aggravate her downstate, dentist husband.

Despite their strength and toughness, Kimball’s women are vulnerable. In the story “To Give Thanks,” 12-year-old Aissa is so upset by her mother’s attempts to turn her into a hunter that she vomits. In a separate scene, Norna feels so anguished and alone that she stifles her own howls with her fists. And in “The Things They Ate,” the darkest and most chilling of these tales, one of Kimball’s women is the fatal victim of a psychopath.

But not every story in this collection is stark or serious. There is also humor and absurdity. In “Spinner Falls,” as Aissa acts out her mild (yet no-less-sweet) revenge upon her deceitful husband, I felt the same wicked smile stretching my face as when I read Margaret Atwood’s stories of gender-based retribution.

These 14, inter-linked stories are arranged in non-linear fashion, shifting between past, present, and future, which the prescient Jane sees flashes of and calls “alternate realities” and “migrations.” Rather than coming off as new-age-y, Jane’s visions seem to fit with the ancient and mysterious power of Michigan’s northern wilderness.

By the time we reach the culminating story of Seasonal Roads – and I do suggest, despite their roaming nature, that you read these stories in order – Aissa has discovered that she is more similar than not to her brave daughter and her rugged mother, whom she strives to understand but never fully does. Like them, Aissa realizes it is here in the north, in the U. P., where she belongs. We leave this tale with Aissa and her red-haired lover fishing without end, hoping to land the monster brook trout they once saw up close and almost caught. This lovely story, and this inspired collection, reach a conclusion that is both satisfying and uplifting, with these two hopeful humans forever hip-deep in the fiercely-cold but life-giving waters of the Little Two-Hearted River.

Lisa Lenzo is the author of two award-winning collections of short fiction. Her latest book, Strange Love, was the recipient of a Michigan Notable Book Award for 2015. She lives in Saugatuck, Michigan. This review originally appeared in broadcast form on “Michigan Bookmark,” a segment on Stateside, a daily program about life in Michigan, produced by Michigan Public Radio.